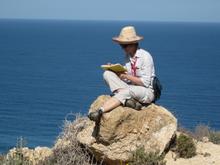 I reconstruct past climate from geological records and have a particular interest in the role of marine gateways in influencing major reorganisations of the climate system.

After a degree in Earth Sciences at Oxford and a PhD on the sedimentology and tectonics of an area of SW Turkey based in Edinburgh with annual secondments to the Universite de Paris-Sud, I sailed on Ocean Drilling Program Leg 160 to the Eastern Mediterranean. Following a post-doc position in Edinburgh working on some of the samples we recovered from the cruise, I moved to Cambridge to work for CASP as a field geologist. I led their Russian Far East Project which involved extended fieldwork in Sakhalin, the Russian island north of Japan and was one of the first western geologists to work there after the end of the Cold War. It was an amazing experience, scientifically and politically.

In 1999 I was awarded a Wolfson Dorothy Hodgkin Royal Society Fellowship to develop a new isotopic tracer for reconstructing the connectivity history of marine gateways - a key control on major changes in ocean circulation and climate. I moved this fellowship from Cambridge to Bristol in 2002 and was appointed to a lectureship in the School of Geographical Sciences in 2004.

Much of my research subsequently has focussed on multi-disciplinary (geochemistry, numerical modelling, sedimentology, tectonics, palaeontology) research on marine gateways principally through EU-funded Marie Curie Initial Training Neworks. I now lead a major scientific drilling initiative, IMMAGE that will recover an 8 million year record of Mediterranean-Atlantic exchange to evaluate its role in local, regional and global climate.

I have also held a number of teaching and adminstrative roles in Geography including most recently, School Education Director, which I thoroughly enjoyed.

I teach at all levels in Geography’s undergraduate programme and really enjoy it. I've also recently finished a  three year stint as Geography's Education Director and was the Chair of the Faculty of Science Quality Team from 2014-17.

The units I contribute to are:

Year 1: Key Concepts in Human and Physical Geography - Introduction to the Geosphere

Year 3: Extreme Climates of the Past

I also love fieldwork and have participated or led nearly every physical geography fieldtrip the School runs.