Only 2.5 per cent of 11 year olds are taking enough exercise, suggests research from the Children of the 90s study, published today in the journal, Archives of Disease in Childhood.

Only 2.5 per cent of 11 year olds are taking enough exercise, suggests research from the Children of the 90s study, published today in the journal, Archives of Disease in Childhood.

It is recommended that kids spend at least an hour a day in some form of moderate to vigorous physical activity, in a bid to promote good health, and stave off the risks of subsequent obesity and diabetes.

The researchers monitored the physical activity levels of more than 5500 11-year-olds in the South West of England over seven consecutive days between January 2003 and January 2005.

The children were part of the Children of the 90s study – also known as Avon Longitudinal Study of Parents and Children – which has tracked the health of more than 14,000 children since birth.

Each child was kitted out with a special piece of equipment (accelerometer, pictured below), worn on an elasticated belt, which recorded minute by minute the intensity and frequency of physical activity.

The researchers were particularly interested in total levels of physical activity and the amount of moderate to vigorous exercise the kids were taking daily.

When the data were analysed, they showed that the children were around twice as physically active as adults, but the boys took more exercise than the girls.

Boys were also more likely than girls to engage in moderate to vigorous forms of activity.

One in five (22%) girls averaged at least one bout of ‘moderate to vigorous’ activity a day, lasting at least five minutes. This compares with 40% of the boys.

But both sexes spent most of their day in light intensity activities. Less than 1% of boys and girls averaged at least one 20 minute bout a day of moderate to vigorous activity.

And only just over 5% of the boys and 0.4% of the girls actually achieved current recommended daily levels of physical activity, equating to 2.5% across both sexes.

Heading up the research is Professor Chris Riddoch from Bath University together with Children of the 90s’ co-director Professor Andy Ness and his team at Bristol. They stress that “only sustained activity is likely to promote cardiorespiratory fitness”.

They add: "It is a sobering thought that children's activity levels actually peak at around this age [11] and decline precipitously during adolescence." 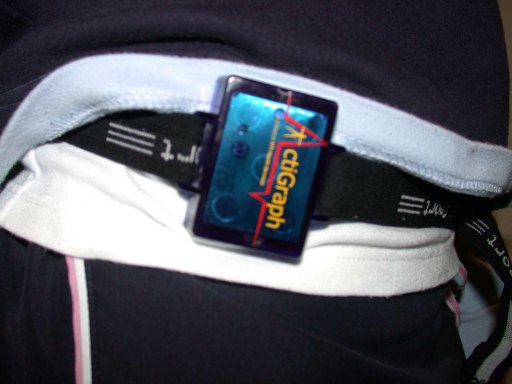 The Actigraph Monitor (shown left) is the size of a matchbox and is worn around the waist. The device counts the up-and-down movement as children, walk, run or engage in other physical activity.

As well as measuring overall levels of physical activity, it also allows researchers to measure activity intensity - by giving a figure for the number of movements it records over the course of a minute.