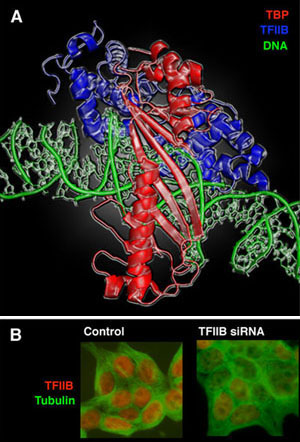 Fig 1: A. Structural presentation of a human TF11B-TBP complex bound to a TATA element. TF11B makes sequence-specific contact with the DNA both upstream and downstream of the TATA box. B. RNAi is used to deplete endogenous TF11B and facilitate analysis of TF11B derivatives in vivo.

The mechanism of action of the Wilms' tumour suppressor protein WT1

Since its discovery WT1 has proved to be a fascinating protein that has roles both in transcriptional regulation and RNA processing. WT1 was originally identified as a gene product that is frequently mutated or abnormally expressed in Wilms’ tumours, the most common solid childhood malignancy. However, WT1 has since been found to play a role in several other malignancies, including leukemia, breast and lung cancer. Our interests concern the mechanisms by which WT1 regulates transcription and it’s role in both development and disease.

We discovered that the transcriptional activity of WT1 is regulated by interaction with a cosuppressor (Figure 2). We have identified one of the components of the cosuppressor complex (BASP1) and are currently in the process of identifying the remaining factors. BASP1 also exhibits tumour suppressor activity and its intracellular distribution can be regulated by myristoylation, phosphorylation and sumoylation. How these modifications regulate the WT1-BASP1 dynamic and their role in transcriptional regulation by WT1 in differentiation and disease are a current focus of our work. 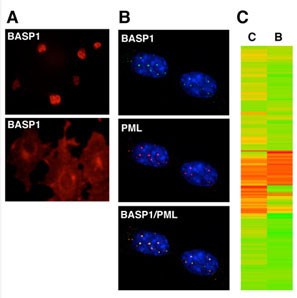 Fig 2: A. BASP1 localization is cell context-dependent. BASP1 is nuclear in a kidney cancer cell line (top), but not Cos 7 kidney cells (bottom). B. Sumoylated BASP1 is directed to PML bodies within the nucleus. C. Microarray analysis shows the presence of BASP1 (B) elicits significant changes in cellular gene expression profile.