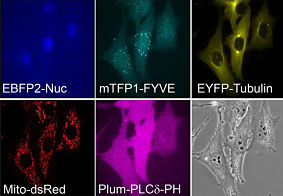 The concept of multigene delivery of fused Acceptor and Donor plasmids, each carrying one or several genes, is not restricted to the baculovirus expression vector system (MultiBac). Protein complex expression in mammalian cells can be achieved by transfection with multiple plasmids, however, this approach invariably leads to imbalanced production from the individual plasmids already in one cell, and moreover to heterogeneous cell populations in a cell culture characterised by variations in the ratio of plasmids incorporated. This impediment can be efficiently resolved by using a single plasmid that contains all heterologous genes for transfection.

This multigene plasmid is conveniently generated by tandem recombineering of MultiMam Acceptors and Donors containing mammalian active promoters and terminators. The resulting multigene plasmid is introduced into the mammalian host cell by using a lipidic transfection reagent following standard protocols. This approach can be conveniently used for labelling and visualising proteins and their actions in entirely homogenous cell populations simultaneously, for example by tracking their fluorescent signal. The ratio of the heterologous proteins will necessarily be constant in these experiments at the single-cell level.

For further information on the mammalian system contact imre.berger@bristol.ac.uk