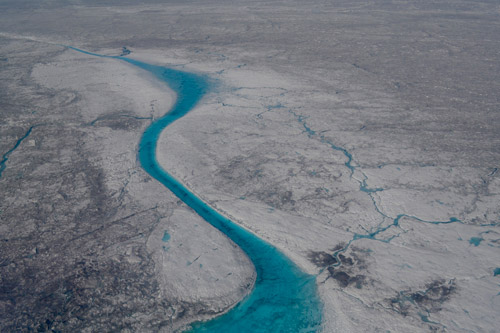 Supraglacial stream on the Greenland ice sheet (ca 35Km from the margin of the ice in the Kangerlussuaq region). The visible dark patches on the ice are heavily colonised by ice algae with algal concentrations reaching up to 100,000 cells per ml of ice. Alexandre M. Anesio

Glaciers and ice sheets have recently been considered significant sources of organic carbon and provide nutrients to downstream marine ecosystems.

However, the exact origin and bioreactivity of the dissolved organic carbon from glacier surfaces are not fully understood.

A team from the Bristol Glaciology Centre – based at the University of Bristol - has found that microbial activity at the surface of the Greenland ice sheet is responsible for a substantial fraction of bioreactive carbon, which in turn has the potential to stimulate other microbes living in downstream ecosystems. Their findings are reported today in Nature Geoscience.

The Greenland ice sheet is the second largest body of ice on Earth, after the Antarctic ice sheet, and can deliver annually around 400 km3 of water to the oceans.

Knowing the chemical composition of this runoff is important since it can influence the productivity of coastal water around Greenland.

Recent studies have found glacial runoff to be a significant source of highly bioavailable nutrients to downstream ecosystems.

The origin and nature of the glacial dissolved organic matter is still a subject of debate.

So far, there have been very few studies conducted on the origin and bioreactivity of the organic matter exported from the Greenland ice sheet, even though the runoff of the ice sheet has substantially increased for the past 25 years.

In this paper, originated from a PhD thesis carried out at the University of Bristol, Dr Michaela Musilova and colleagues from the School of Geographical Sciences present simultaneous measurements of microbial activity and dissolved organic carbon composition from different surface habitats of the Greenland ice sheet.

Because the amount of microbial respiration was lower than photosynthesis, they calculated that a significant fraction of the CO2 used for photosynthesis is accumulated on the ice as organic carbon.

Their measurements of microbial photosynthesis were significantly correlated with the concentration of bioreactive dissolved organic species.

Professor Alexandre Anesio from the Bristol Glaciology Centre, said: "This study provide strong evidence that photosynthetic microbes at the surface of the ice produce large amounts of good quality carbon that is released in the runoff during the summer.

"This bioreactive carbon has the potential to be utilised by bacteria in downstream environments, which in turn can increase the turnover of nutrients and productivity of downstream ecosystems.

"For a few years now, we have known that certain types of algae can grow well on ice surfaces and this study take us one step further to demonstrate that this active ice microbial community can also change the chemical composition of the ice and the water that leaves the Greenland ice sheet."

Professor Martyn Tranter, also from the Bristol Glaciology Centre, said: "Considering the abundance and distribution of algae in certain regions of the ice sheet, we have been hypothesising that they would have a strong influence on the delivery of bioreactive carbon from the ice.

"We are now currently demonstrating through the Black and Bloom project that these algae can also influence the darkening of the ice, which generates additional melting during the summer."

Professor Anesio added: "This demonstrates that glaciers and ice sheets should be considered as one of the biomes of Earth because they are a clear example of large scale ecosystems that have specific forms of life that can modify the physical and chemical environment that they live in."