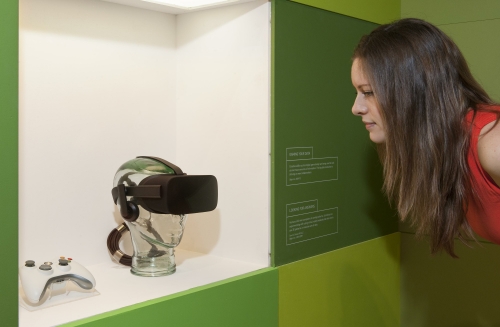 Software scans your face to guess your age, gender and mood The Science Museum, London

Children of the 90s data is presented in virtual reality (VR) as part of Our Lives in Data, a new exhibition at the Science Museum in London.

From our social media activity to our genes, more and more information about our lives is being recorded as huge amounts of data and this new exhibition explores how ‘big data’ is being used to transform the world around us.

Children of the 90s worked with University of Bristol-based colleagues Data2Knowledge to supply enormous amounts of anonymous information to game designers Masters of Pie who used VR tools to create new technology which will help researchers understand vast collections of data like Children of the 90s.

The Children of the 90s dataset is ideal for testing the multi-dimensionality of our concept. It allows researchers to explore the data in new ways using what we call a “meandering search” approach.

I work with data sets that are so huge that they are difficult to explore. The VR technology that Karl and his team have developed lets me see four times as much information at a glance. It is so new that we still can’t quite comprehend the true scale of what it can do.

There are lots of other projects featured in the exhibition too, including facial recognition software which guesses your age, gender and emotions, a ‘cryptophone’ that prevents access to your mobile phone data, and paint that blocks wifi signals.

The exhibition is free and runs at Science Museum in London until September 2017.