Over the last year or so Jeff Brunstrom and Peter Rogers have been working with Dr Jon Holtzman, who is a cultural anthropologist from Western Michigan University. As part of this project we have also collaborated closely with Dr Kevin Myers, who is an expert in animal dietary behavior and is based at Bucknell University in Pennsylvania.

In the NBU we try to unpick the mechanisms and principles that govern human dietary behavior. However, there is a danger that by studying people who have been exposed only to a Western diet we might overlook important detail or, worse still, we might draw general conclusions that don’t translate to other cultures.

To address this concern we have been testing some of our ideas in Kenya. Our work was recently featured in the BBSRC's Food Security News. The BBSRC also produced a short film to accompany this news item. You can find out more here. Our research represents a novel interdisciplinary collaboration that fuses the comparative perspective of cultural anthropological approaches with rigorous empirical methods. With the help of Jon Holtzman we have been exploring the dietary behaviour of the Samburu. This indigenous population are semi-nomadic pastoralists who live in a remote arid area of North Central Kenya.

In June 2014, Jeff Brunstrom and Peter Rogers spent three weeks conducting field research. The Samburu are interesting to us because they have been exposed to a very narrow range of foods. No ‘processed’ foods and certainly no ‘diet’ products or diet sodas! This makes them an ideal population to study because they can help us to understand the comparative effects of exposure to dietary variability and complexity in our own dietary environment (a central theme of an ongoing BBSRC-funded project). Through our research we have learned a lot about cultural differences in response to sugar and the role that sweetness and artificial sweeteners might play in the control of appetite. 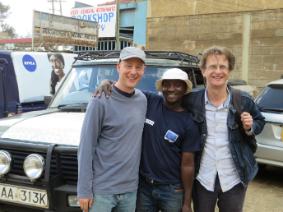 Other coverage of our work