The great Bristol shake off - making our world earthquake safe 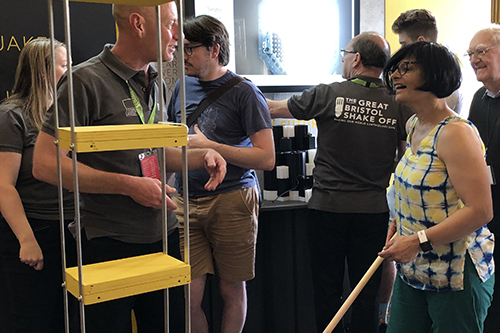 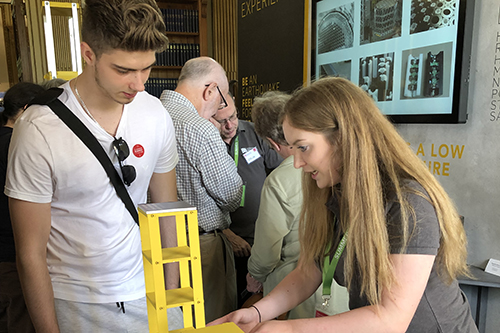 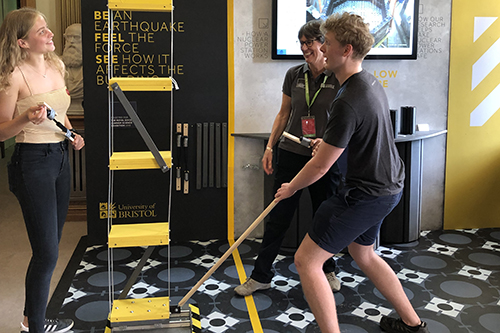 Visitors trying to be an earthquake Joanne Fryer

Can fake earthquakes help safeguard nuclear reactors against natural disasters? Visitors to this year's Royal Society Summer Science Exhibition will be given the opportunity to find out for themselves thanks to research from the University of Bristol, in collaboration with EDF Energy.

Members of the public will be able to explore the interactive exhibit at the free festival to celebrate the most exciting cutting-edge science and technology in the UK, running in London from Monday 1 to Sunday 7 July.

Professor Colin Taylor, Dr Adam Crewe and colleagues will demonstrate in 'The great Bristol shake off' how simulating earthquakes could help protect nuclear reactors against natural disasters.  Bristol’s “shaking table” has already been used to understand the behaviour of the graphite cores of nuclear reactors during earthquakes.

Nuclear power stations are designed to operate safely in the most extreme of conditions and as part of this process EDF Energy has been researching how a seismic event might affect their reactors.  To better understand this, they commissioned the University of Bristol to develop an experiment that would test the capability of a reactor to withstand an earthquake of a magnitude not seen in the UK before.

Around 200-300 earthquakes are detected in the UK by the British Geological Survey each year, only around 10 per cent of them can be felt by the public.  The strongest earthquake ever recorded around the UK was a magnitude of 6.1, the tests conducted by the University of Bristol have simulated activity of 7.2 with no adverse impact on the safe operations of the reactor.

EDF Energy operates seven Advanced Gas-Cooled Reactor (AGR) power stations (14 reactors) which provide about 15 per cent of the UK's electricity. Their safe operation is crucial to ensuring enough electricity is generated in the UK.

These AGRs, unique to the UK, were designed and built in the 1970s and 80s.  Their nuclear core is made up of thousands of interlocking graphite bricks. As these reactors age fine cracks occur in the graphite bricks. It is important that EDF Energy is able to prove that under extreme conditions like a severe seismic event these cracks would not cause the bricks to move in a way that would prevent the reactor from safely shutting down.

To help understand the effect of an earthquake on the nuclear core, a high precision, quarter-sized scale model of an AGR graphite reactor core, containing over 40,000 components and 3,200 sensors, has been developed and built by researchers at Bristol.  The model AGR Core is shaken on Bristol’s earthquake shaking table to find out how the ageing graphite bricks behave during an earthquake.

Colin Taylor, Professor of Earthquake Engineering in the Department of Civil Engineering, said: "The team designed and developed the whole model, including bespoke miniaturised data sensor systems that are inserted in many of the model bricks to measure their response in detail.  We believe this is the most complicated shaking table experiment ever undertaken and our research can contribute to nuclear safety in the years to come.

"We hope, as well as having fun, some of the young people visiting our exhibit will recognise earthquake engineering is relevant in the UK, to protect important structures such as nuclear installations, and consider engineering as a degree option."

Dr Jim Reed, Chief Graphite Engineer at EDF Energy, added: “Safety is paramount at our nuclear power stations. The results from the tests being carried out have been used to improve and validate the computer models that are used by EDF Energy to assess the seismic safety cases of all of our reactors and have helped us to show that the reactors would be able to shutdown as designed with no erosion of safety."

Members of the public attending the exhibition will have the opportunity to:

The visionary science and technology event provides the public with a unique opportunity to interact with scientists and engineers and ask questions about their work. The exhibition involves a highly competitive selection process, with only 22 research groups chosen to host an exhibit – meaning the UK’s leading scientific research is collated in one place.

For more information on studying our MSc in Earthquake Engineering and Infrastructure visit; http://www.bristol.ac.uk/engineering/departments/civilengineering/courses/postgraduate/msc-earthquake-engineering/