Since 1962 storage cell codes have been developed to simulate flow on fluvial and coastal floodplains. These models treat the floodplain as a series of discrete storage cells, with the flow between cells calculated explicitly using analytical flow formulae such as the Manning equation. The basic principle behind such codes is that, with the exception of catastrophic floods (e.g. dam-break scenarios), two-dimensional flow over inundated plains is most often a slow, shallow phenomenon where local free surface slopes are very small. As such, it can be hypothesised that floodplain flows are primarily influenced by bed roughness rather than topographically-induced velocity gradients, allowing the inertial terms to be dropped from the dynamic governing equations of de St Venant (Cunge et al., 1980).

This simplified mathematical description was first incorporated in the numerical model of Zanobetti et al. (1968, 1970) for the simulation and prediction of seasonal flooding episodes across the Mekong Delta, Cambodia . Covering an area of 50,000 km 2, the two-dimensional model consisted of 350 polygonal cells chosen to represent discrete flood storage compartments on the floodplain. Flow between cells was calculated according to Manning/Strickler or weir-type formulae (Cunge, 1975).

In 1975-76 a one-dimensional inertial (de St Venant) model of looped channel flow was integrated with an inertia-less storage cell algorithm, and solved implicitly using the finite difference Preissmann (1961) scheme. Thus the storage cell approach first applied to the Mekong Delta was now linked to a more accurate representation of in-channel flow processes and provided the earliest example of a coupled 1D-2D models. A full description of all early algorithmic and computational details can be found in Cunge et al. 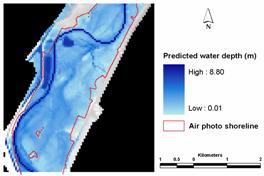 During the 1980s and 1990s software and computing developments led researchers to attempt to integrate coupled 1D-2D models within Geographical Information Systems using a variety of cell geometries including hexagons (Estrela and Quintas, 1994), regular grids (Bechteler et al., 1994; Bladé et al. 1994) or whole floodplain units (Romanowicz et al., 1996). However, such applications lacked the topography and validation data necessary to capitalize on the software and modeling developments. Only recently has the wide availability of fine spatial resolution topographic data sets from such sources as airborne laser altimetry (LiDAR) and model validation data from satellite and airborne radar systems allowed storage cell modeling to become a realistic possibility.

LISFLOOD-FP was developed in 1999 in a joint effort between the University of Bristol and the EU Joint Research Centre to capitalize on these new data sources (Bates and De Roo, 2000). The model was designed to be the simplest physically plausible representation capable of simulating dynamic flooding, thereby allowing large areas to be modelled at fine spatial resolution (10-100m cell sizes). The model was designed to work on a regular Cartesian grid to allow ready integration with available GIS data sets and was written in a dynamic GIS language, PCRASTER, to further facilitate this link. It has since been re-coded in c++ for compu.