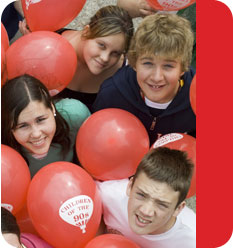 Children of the 90s (ALSPAC) is one of the most important long-term health research projects ever undertaken. Over 14,000 mothers agreed to take part during their pregnancies in 1991 and 1992, and the study has followed the health and development of their children ever since.

The Children of the 90s study now holds a vast bank of information and biological samples donated by thousands of teenagers and their families. This unique resource is used by scientists all over the world for vital research into a wide range of medical and social problems.

Originally, all the ALSPAC families lived in the old Avon area - around Bristol and Bath. Now, some live as far away as Australia, Kenya and Brazil - but they still take part, and the ALSPAC project is now famous all over the globe.