Honorary degree for Children of the 90s founder, Jean Golding 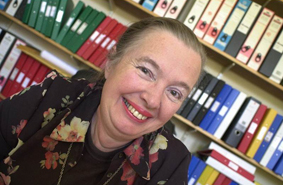 Children of the 90s founder, Professor Jean Golding OBE, will receive an honorary degree from University College London today, in recognition of her pioneering work in longitudinal population studies.

Speaking in advance of the occasion, Professor Golding said:

‘I consider this an honour, not just for me, but for the many participants and members of staff that contributed to the many studies I have been involved with, especially those in Children of the 90s.’

Here is the full text of the oration, delivered by Martin Butcher.

‘President and Provost, I beg leave to present to you Professor Jean Golding for conferment of the degree of Doctor of Science honoris causa.

When asked what made her who she is, Professor Golding is said to have replied, “stubbornness”. Stubbornness, courage, determination: these qualities were certainly needed in her early life. Her start at school was delayed when she developed a form of tuberculosis leading to hospitalisation in a cot in the middle of a ward with 20 elderly women. A traumatic experience she called it.

Then at the age of 14, she lost another year of schooling when she contracted polio. Undaunted, she excelled at school, but while her passions were zoology and chemistry, the school directed her towards mathematics because of her disability which would have caused difficulties in coping with practical work. She read the subject at St Anne’s College Oxford – one of the very few women in the sciences and maths in Oxford at the time.

She went into mathematics teaching, but personal circumstances meant that, after a while, she was forced into doing a variety of jobs while bringing up two children: editing, proofreading, writing guides for teachers in the Third World.  She took up work as a research statistician working on a large epidemiological survey of the health of people in the UK where, in her own words, she completely fell in love with the question of why prevalences and patterns of diseases varied so greatly across the country.

This was the mid-1960s, predating computers, and the analyses were done using punch-cards. For Jean Golding, this could be described as a light-bulb moment, and the enthusiasm it generated led to her gaining a Research Fellowship at UCL where she obtained her PhD in medical statistics.

Her early work was with the Oxford Record Linkage Study and the 1958 national birth cohort – analysing, among other things, the issue of home versus hospital delivery, still birth and neonatal mortality and, later, the association between pre-marital conception and adverse birth outcomes.

In 1980, Dr Golding took up a Senior Research Fellowship at the University of Bristol, and, in 1991, she was awarded a personal chair as Professor of Paediatric and Perinatal Epidemiology. She helped design and establish the National Greek Perinatal Survey and the Jamaican Birth Survey. But the most audacious and groundbreaking project was ALSPAC – formally known as the Avon Longitudinal Study of Parents and Children and, less formally, as Children of the 90s.

The study recruited women when pregnant, rather than at the birth of their child, and enabled the establishment of a unique bank of biological samples. The initial sample was more than 14,500 women living in the Bristol area in 1990-92 and its aim was to investigate the many influences on health and development. It was the first birth cohort to take on the insights of the molecular revolution in medicine.

The range of data from this study is of an unprecedented scale and richness, and more than 1,500 papers based upon its data have been published. Such has been the importance of the ALSPAC work that it has attracted funding from the Medical Research Council, the Wellcome Trust, the National Institutes of Health in the US and the European Commission as well as UK charities and government departments.

As an internationally recognised pioneer in longitudinal population studies, Professor Golding has attracted numerous awards. She is a Fellow of the Royal Statistical Society and the Royal College of Paediatrics and Child Health.

In 2002, she was awarded an OBE and, in 2003, the University of Bristol conferred an Honorary Doctorate of Laws upon her. Most recently, she has been honoured with the naming of the Jean Golding Institute for the study of data science at Bristol in recognition of her curiosity-driven approach to scientific research and its enormous impact on public health.

UCL has strong research activities in population cohort studies with, among others, the Centre for Longitudinal Studies in the Institute of Education and the MRC Unit of Lifelong Health and Ageing in UCL Population Health Sciences. It is, therefore, wholly fitting that UCL should celebrate the achievements of one of the founders of the population cohort study movement who spent some of her formative years here.

If our honorary graduand, as she says, began in mathematics and found her passion in epidemiology and public health, it was the happiest of discoveries and led to a stellar career. Provost and President, I present Professor Jean Golding.’