The state-of-art of airfoil noise reduction relies mainly on passive methods, such as trailing edge serrations, airfoil optimization design, etc. The most important aspect of this research is to introduce and investigate the concept of morphing aero-structures for aero-acoustic purposes, which can actively manipulate the flow behaviour around the airfoil.

This project synthesised a novel polymer network that remodels under mechanical stress using heterocyclic mechanophores as crosslinkers. Under the application of sonication the mechanophore undergoes retro-cycloaddition breaking the crosslink. The functional groups produced from retro-cycloaddition were detected using infrared spectroscopy and flourogenic probes. This polymer is proposed to be used to mitigate against the initiation and development of critical and sub-critical damage in composite materials.

Phase change materials (PCM) embedded in textiles have the ability to protect the user from extreme cold exposure by releasing latent heat previously absorbed from the skin surface. Due to low thermal capacity however, current PCM textiles have proven insufficient in providing effective personal thermal protection. In order to provide the heat capacity required, larger volumes of PCM must be incorporated into such systems. However, to provide the heat release rate required for personal protection, an increase in volume of PCM must be accompanied by an increase in material conductivity and diffusivity. This project involves the development of PCM micro-composites with enhanced conductivity, for encapsulation within personal protective clothing systems. The thermoregulatory performance of the resulting clothing is assessed on a biomimetic thermal rig that is capable of simulating skin temperature variation and heat flux upon cold water exposure.

Structural health monitoring involves the use of a permanently attached sensory system that continuously monitors the development of internal damage throughout a structures lifetime.

The embedding of artefacts between the plies of composite laminates produces a number of internal defects that can give rise to significant stress concentrations. The work carried out during this project examined the mechanical performance of pulse echo piezoelectric sensors embedded within composite laminates. The analysis was performed using a combination of numerical modelling and experiments. The key finding was that the compressive performance of quasi isotropic laminates was not significantly reduced by the presence of embedded sensors.

Although significant attention has been played to biomimetic actuation – particularly osmotic plant actuation – these studies have failed to grasp the importance of the wider sensing and control systems that surround the actuation. Through investigation of the sun-tracking function of plants – and a specific case study of the Cornish Mallow leaf – this research aims to develop a concept for a novel light-tracking multifunctional structure, employing UV initiated chemical sensing and geometric control of pH stimulated hydrogel actuators. The concept device would have obvious application to the solar tracking of photovoltaic panels.

Antimicrobial nanocomposite fibres for the development of multifunctional wound dressings

Novel antimicrobial nanoparticles, developed at The University of Bristol, will be incorporated within a natural polysaccharide matrix to create a nanocomposite material from which films and fibres can be processed.

These nanocomposites will have their surfaces and internal structure characterised by various microscopies to observe the nanoparticle distribution. Following this, the elution of antiseptic from these materials will be characterised over a week time period, with the aim of achieving a dose dependant response.

The control of aeroelastic performances is a growing source of interest to aircraft designers so as to improve aircraft efficiency. Such control is known as aeroelastic tailoring. The traditional wing structural design based on straight spars, ribs and stringers is a heritage of the metallic aircraft era. The use of composite materials can permit the development of new wing structures as the material is formed at the same time as the structure. This offers the possibility to control the stiffness and mass characteristics of the wing.

The motivation behind this research is the development and characterisation of novel hierarchical fibre architectures. Structural hierarchy within a material is abundant in nature often providing gracious failure of natural fibrous composites, whereas man-made composites are currently limited in this domain. Previous work at the University of Bristol has been inspired by the use of highly aligned short discontinuous fibre composites to improve ductility and manufacturability whilst attempting to maintain structural properties in the material. 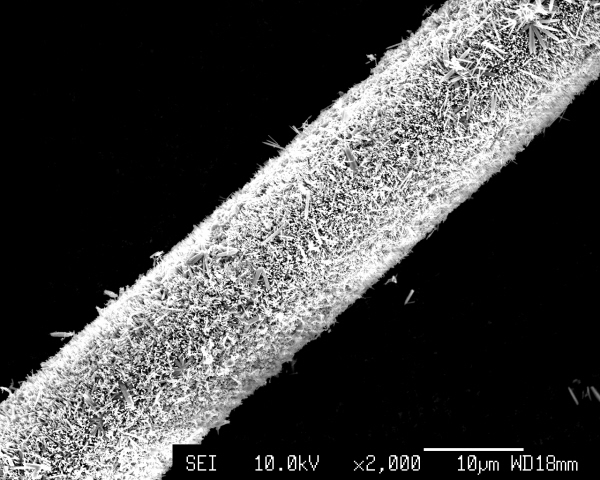 This research focuses on the grafting of zinc oxide nanorods onto short glass fibres in order to alter interfacial shear strength and hence load transfer in discontinuous fibre composites. It has been shown that growth of zinc oxide onto a glass fibre surface is feasible, whilst tensile properties of the glass fibre remain unchanged. Further research will focus on the alignment of these discontinuous fibres with potential for novel manufacturing techniques to be used such as additive layer manufacturing.

Image (right): A Glass fibre coated with ZnO nanorods attached for the alteration of interfacial shear strength in a composite.

Exploring the relationship between human, material and form

This work explores the manufacturing aids that laminators make themselves and use in hand lamination tasks. These tools are perceived by many to be a source of variability in the layup process but this investigation is the first known of in literature to produce some initial concepts and thoughts to the role they play. The developed understanding has resulted in preliminary design requirements and prototypes for standardised aids, that could perform the same role as their handmade predecessors. It is anticipated that these prescribed aids, and techniques for their use, could equip laminators with a more standardised methodology for approaching lamination.

Ultrasonic particle manipulation has been effective in producing complex patterns of particles within a fluid medium, and so has been used extensively within microfluidics. Previous work within ACCIS has used this technique to develop anisotropic composite materials with microfibre reinforcements. The aim of this work is to determine the ability of these acoustic radiation forces to manipulate and pattern nanofibres, which may act as a stand-alone reinforcement or used in conjunction with larger reinforcements to improve stress transfer from the matrix to the fibres. Typically, manipulation of smaller particles requires the use of higher frequency waves, which are both more difficult to produce and amplify errors within the system. Due to the increased attenuation of higher frequencies, the effects of streaming will also become more significant.

Tufting belongs to the class of Through-the-Thickness Reinforcement (TTR) techniques developed for local improvement of the out-of-plane mechanical behaviour of 2D composite laminates, especially in terms of delamination management. Extensive experimental work has confirmed the effectiveness of tufting in improving the damage tolerance of dry fabric-based composites. However, the application of TTRs in the form of tufts at industrial level requires tools for the prediction of their effects at various scales (from micro- to macro-). This project aims at formulating an analytical model for mode I delamination bridging carried out by single tufts. The model is calibrated and validated against experimental results. The bridging mechanics is described by a traction/separation law that can be implemented into larger scale (meso- and macro-) cohesive zone models for the analysis of tufted sub-elements and structures.

Intelligent composite lay-up by the application of discrete technologies

Hand layup is still the dominant forming process for the creation of a range of complex geometry and mixed material composite parts. However, this process is still relatively poorly understood and informed, limiting productivity. This work seeks to address the issue by proposing a system enabling a laminator to be guided in real-time, based on a predetermined and unambiguous instruction set thus improving the standardisation of produced components. As a demonstrator, a U-Shaped component, typical of the complex geometry found in many difficult to manufacture composite parts, was chosen and its drapeability assessed by the use of a kinematic drape simulation tool. An experienced laminator’s knowledgebase was then used to divide the tool into a finite number of features. Layup was conducted by projecting the instructions and sequentially highlighting the target features, while tracking a laminators hand movements across the ply. The system has been implemented with affordable hardware and demonstrates tangible benefits in comparison to a number of currently employed laser systems. It has shown remarkable success to date, with rapid Technology Readiness Level advancement. This is a major stepping stone towards augmenting manual labour with further benefits including more appropriate automation.

Bend-twist coupling has been extensively researched for wind turbine applications as a means of shedding load and improving turbine performance in response to sudden changes in wind speed during turbulent wind conditions. To date, it has not been looked at for composite aero engine fan blades, but could have similar benefits without creating detrimental interlaminar stresses. Using the centrifugal force as a driver it may be possible to optimise the blade shape across a variety of running speeds by deliberated incorporating extension-twist or other couplings. New technology for manufacturing plies with variable fibre orientations, so called Variable Angle Tow (VAT) laminates, is becoming available. This gives additional freedom to the ply and laminate orientation to different locations within a part and can thus be used to tailor the coupling.

Since elastic tailoring for composite fan blades has not been previously investigated the feasibility of deploying such technology to produce bend/twist coupling using variable angle tow technology into a blade design will be investigated.