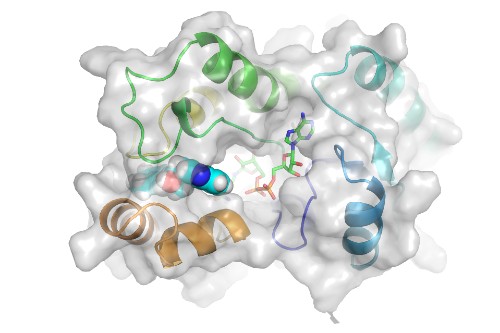 New inhibitors for TB drug targets. Thai and Bristol researchers have identified a new way of inactivating one of the main targets for anti-TB drugs that avoids the most common resistance mechanisms. Image shows their molecule (solid spheres) binding to its protein target. Professor Jim Spencer

Researchers at the University of Bristol are working on a number of different developments to finally end the TB epidemic.

Essential to making this breakthrough are better diagnostic tools, tackling growth in drug-resistance and a better understanding of TB epidemiology.

Although TB incidence in the UK is low compared to many parts of the world, it remains a public health threat. Global efforts to counter TB have saved an estimated 63 million lives since the year 2000, but World Health Organisation (WHO) data estimates that in 2019 there were 10 million new cases of TB disease, of which 465 000 were caused by drug-resistant strains, and 1.4 million people died.

Several projects in Bristol are seeking to develop innovative tools for faster and more accurate disease diagnosis. Dr. Annela Seddon at Bristol’s School of Physics, who is working on one such project with the Kenya Medical Research Institute, said: “Current tools for TB diagnosis are inadequate in many of the resource-limited settings where the disease is most prevalent as they either lack sufficient accuracy or require infrastructure such as a reliable power supply which simply isn’t available in many of these locations. We are applying Bristol’s expertise in functional materials to develop new tools for that can form the basis of TB diagnostics to overcome these obstacles.”

The growth in drug-resistance in TB is also a major challenge to efforts to eradicate the disease. Bristol is a UK centre of excellence in the study of antibiotic resistance and has a long history of research developing naturally occurring molecules into useful medicines.

Professor Adrian Mulholland of the School of Chemistry and Professor Jim Spencer of the School of Cellular and Molecular Medicine are collaborating with researchers in Thailand to apply computational methods to TB drug discovery. Meanwhile Professor Paul Race in the School of Biochemistry is working with research teams in Kenya and South Africa to identify new treatments for drug-resistant TB. Prof. Race said: “TB has developed resistance to existing drugs, even when they are used together in combinations, by accumulating mutations that eventually cause the drugs to lose their effectiveness. We hope to slow this process by identifying new drugs effective against TB, and using them together to slow the development of resistance.”

About one quarter of the world’s population is believed to be infected with TB. In the UK, TB also exerts considerable impact in the form of bovine TB, which in England triggered the slaughter of over 30 000 cattle in 2019. The South West sits in the area of the UK defined as High Risk for bovine TB.

Individuals in contact with infected animals such as cattle can contract TB from them thus understanding this transmission is important for controlling the disease at a country level. Dr. Ellen Brooks-Pollock, an infectious disease epidemiologist working at the University’s School of Veterinary Sciences, leads the ZooTB project seeking to establish the extent of transmission of TB from cattle to humans (known as zoonotic TB), focusing on South-West England. Dr. Brooks-Pollock said: “We simply do not know the true extent of zoonotic TB in the UK as cases are sporadic and not always recognised or reported. The ZooTB project aims to assess the prevalence of zoonotic TB and better understand the potential risk that it poses to public health.”

World TB Day, observed on March 24, marks the anniversary of the announcement in 1882 of the discovery of Mycobacterium tuberculosis, the bacterium that causes tuberculosis.

The theme of World TB Day 2021 is “The Clock is Ticking” which highlights the risk posed by the COVID-19 pandemic to progress towards the WHOs EndTB strategy and calls upon world leaders to reaffirm recent commitments to the eradication of this devastating, but preventable and curable, disease. Researchers working across the University of Bristol are looking to play their part in the ongoing struggle against one of the world’s deadliest infectious killers.