A joint EPRSC UKRI Innovation Fellowship, held by John Fennell and Laszlo Talas, aims to contribute to the reduction in antimicrobial resistance and further introduce AI techniques to veterinary practice.

The primary focus of the research is Bovine respiratory disease (BRD), which is the most common and costly disease affecting cattle in the world. BRD is a complex bacterial infection that can be fatal and is estimated to cost the UK cattle industry £80M annually. Although manual scoring systems exist to aid early identification of the disease, they are time consuming and rarely used in practice. Commonly, identification of BRD is only in later stages of the disease when antibiotics are essential for treatment. Early and automated identification of BRD will have significant impact:

Taking this approach to BRD is consistent with the influential O’Neill report and many reviews that identify early diagnosis as the key to effective disease control and reducing reliance on antibiotics.

The project uses artificial intelligence techniques, coupled with visible-range and thermal cameras, to identify BRD at the earliest possible stage with main goals of establishing: 1) how early in disease development affected animals can be reliably identified; 2) the best way to scale up image capture and machine learning to automatically screen animals and alert farmers to those needing treatment; together with 3) developing a protocol for effective use of the trained system. The aim of the proposal is to develop a system based on providing the best possible information in a timely manner, which is key to making right judgements for farmers and vets alike. It is believed that a system based on low cost cameras and sensors, together with state of the art deep neural networks, can provide this.

The project involves a range of UK-based advisors:

as well as several European veterinary practices including:

The completed fellowship will result in a working and tested prototype system capable of development into a viable commercial product. During the fellowship a network of industry collaborators (including farmers, vets, advisory/regulatory bodies, equipment manufacturers and food producers) will be developed to support and promote the research and resulting product. 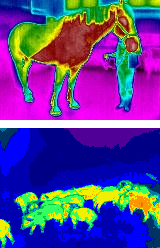 Scaling to other species

The outcomes of the project are expected to be scalable and generalise to other diseases and animal species (e.g. horses, pigs). John and Laszlo has been awarded an EPSRC Impact Acceleration Early Researcher Kickstarter Award to investigate the uses of thermography coupled with deep learning to detect diseases in racehorses.