Children growing up in the care of relatives in the UK 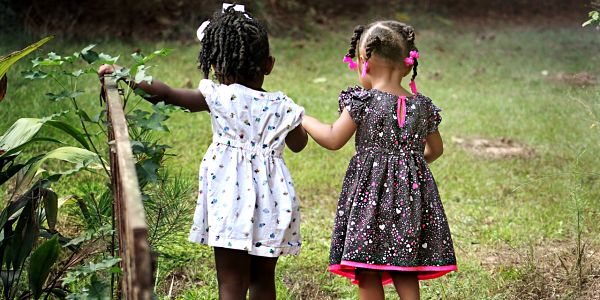 The family environment that children grow up in can greatly influence their outcomes in terms of development and wellbeing. Although most children in the UK still live with at least one parent, some are unable to live with their parents due to reasons such as neglect or abuse by parents, parental sickness or death, parents being in prison, family circumstances such as poverty, parental drug and alcohol abuse or mental health issues. The majority of these children live with relatives or friends, otherwise known as kinship care.

Kinship placements can be either arranged formally through local authorities and courts, or informally between relatives and friends. In the absence of good parental care, kinship care is generally considered a better alternative to being fostered by unrelated foster carers, as children are more likely to have better mental health and behavioural outcomes.

There is no legal obligation placed on the families to inform authorities of kinship care arrangements. Therefore, most children and families are not known to the authorities and thus do not receive specific support from the State. Nor is there a statutory provision available to address the impact of early adverse experiences on the health and wellbeing of these children.

This briefing paper provides the most current estimates of the number and characteristics of the children growing up with relatives in the UK, which were established through analyses of secure microdata from the 2011 Census.

The number and characteristics of the children growing up with relatives 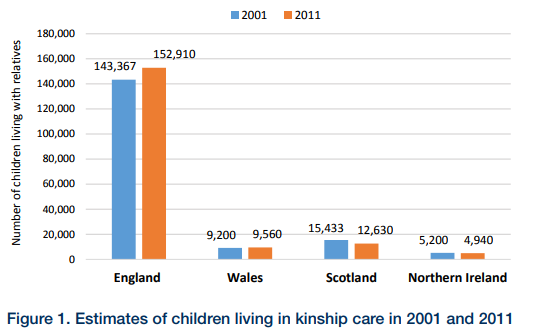 Since 2001, the numbers of children growing up in the care of relatives in England and Wales had grown at rates higher than the child population of the countries.

Scotland, on the other hand, has seen a sharp decrease in the number of children growing up in the care of relatives. In Northern Ireland, both the total child population and the kinship child population had decreased since 2001 at a similar rate. 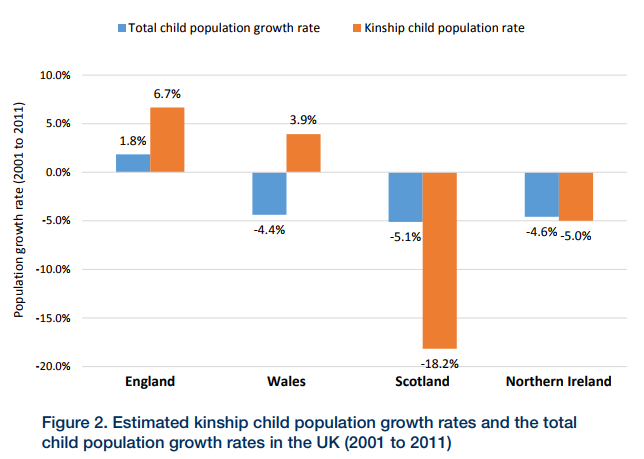 The characteristics of the carers of the children

There are three distinct types of relatives caring for the children: grandparents, siblings or other relatives (such as aunts, uncles and cousins).

In all countries of the UK, the majority of relative-carers are grandparents.

Sibling carers are more likely than grandparent and ‘other’ relatives to be looking after two or more children in the household.

When compared with parents, relative carers are more likely to: 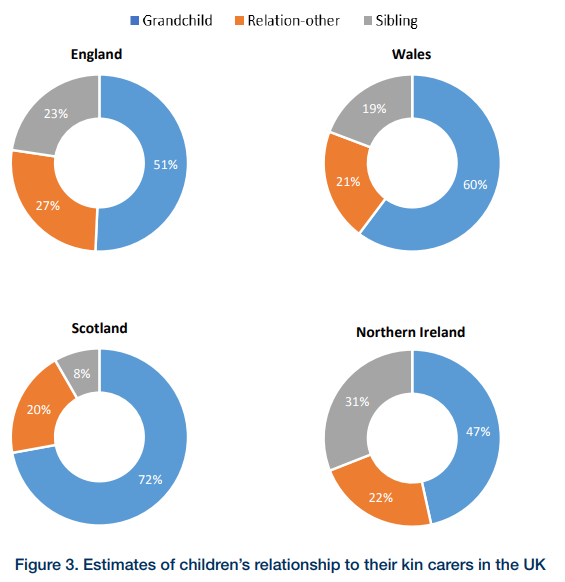 Poverty has an impact on the overall health and wellbeing of families and negatively impacts children’s life trajectories. 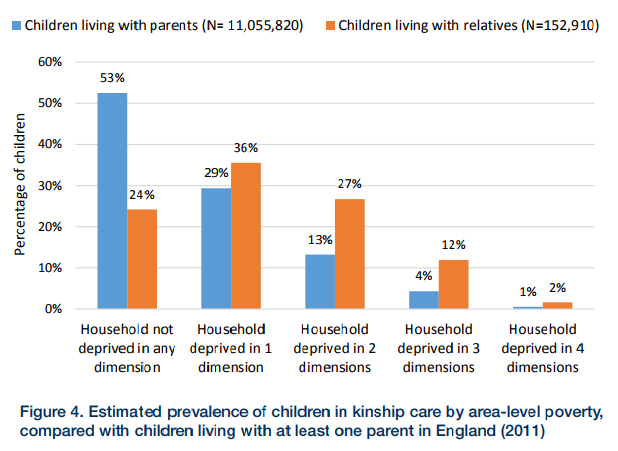 Children in kinship care face more deprivation than children living with at least one parent4, 5 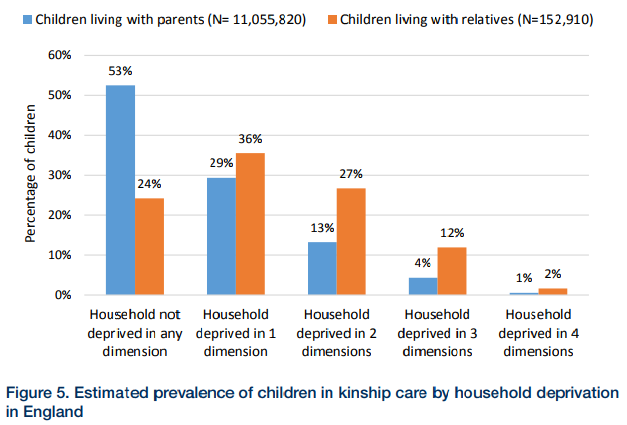 To find out more about this research, including information about the methodology and detailed briefings for each country, please visit the project website: www.bristolkinshipstudy.co.uk

A more detailed policy briefing on kinship from the Kinship Care Alliance in England can be accessed here.

Children growing up in the care of relatives in the UK (PDF, 193kB)

Notes
All statistical 2011 estimates from: ONS. Estimates calculated from 2011 Census Secure Microdata with 2001 comparison data extracted from Nandy et al., 20111. Usually, kinship care is defined as when a child is brought up by a relative or a friend. However, it was not possible to identify children growing up in the care of friends in the Census. Therefore, children in kinship care in this study are children who are growing up in the care of relatives, such as grandparents, siblings, aunts, uncles and cousins2.

This work contains statistical data from the Office for National Statistics (ONS), which is Crown Copyright. The use of ONS statistical data in this work does not imply the endorsement of the ONS in relation to the interpretation or analysis of the statistical data. This work uses research datasets which may not exactly reproduce ONS aggregates.