The roof of the Physics laboratory is home to a 25 cm optical telescope housed in its own dome. Thanks to a generous contribution from the class of 1965, this optical observatory was upgraded over the summer of 2015. The donation from the alumni covered half of the cost of the project, which included completely replacing the dome that houses the telescope as well as purchasing a new camera for the telescope. 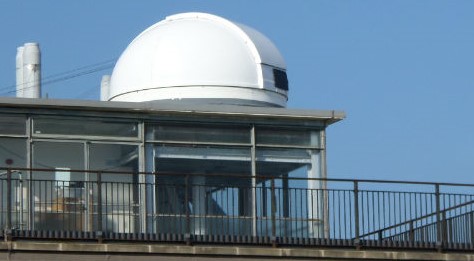 The upgrade has converted the optical observatory to a robotic facility enabling remote operation by observers. Previously, students using the telescope were required to be physically present on the roof at night. Due to space and safety limitations, this meant that only a few students each year were able to use the telescope.

The new dome is motorised, allowing the dome to be opened and closed, and rotated by computer control. The same computer controls the telescope and with the aid of the new camera will be able to accurately point the telescope at an observing target, follow it as the Earth rotates, and take images and spectra.

The new camera includes a "guider" which uses bright stars in the image to lock the telescope into position so that it does not drift away from the target of the observation over time. This will allow students to image deep-sky objects (which are too faint to see in a short image) by taking long exposures, safe in the knowledge that the telescope will not drift during the exposure (which would blur the image).

The camera also has a filter wheel that will enable the remote observer to take images through different colour filters to measure the colour of objects (to estimate, for example, the temperature of stars). The wheel also includes a new prism which will let the students disperse the light from bright sources into a spectrum to look for the emission and absorption signatures of different chemical processes in their target objects.

Finally, the camera has a much faster readout than the previous model, which will allow the students to attempt "lucky imaging". This is when hundreds of very short images of the same target are taken. Every so often, there will be a chance alignment of the turbulent regions in the air above us, allowing a clean sharp view through the atmosphere. The students will computationally select these rare, lucky images and combine them to make a single image that is much sharper than any normal image that could be taken through Bristol's skies.