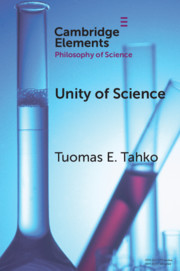 Unity of science was once a very popular idea among both philosophers and scientists. But it has fallen out of fashion, largely because of its association with reductionism and the challenge from multiple realisation. Pluralism and the disunity of science are the new norm, and higher-level natural kinds and special science laws are considered to have an important role in scientific practice.

What kind of reductionism does multiple realisability challenge? What does it take to reduce one phenomenon to another? How do we determine which kinds are natural? What is the ontological basis of unity?

In this Element, Tuomas Tahko examines these questions from a contemporary perspective, after a historical overview. The upshot is that there is still value in the idea of a unity of science. We can combine a modest sense of unity with pluralism and give an ontological analysis of unity in terms of natural kind monism.