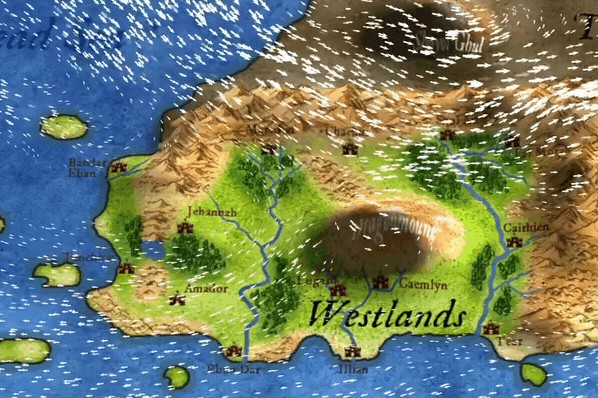 Scientists from the University of Bristol and Sussex have run climate simulations of the Wheel of Time world, whose season finale airs on Amazon Prime on Christmas Eve.

The aim of this study, published today by The Conversation, was to bring the climate crisis into a context that millions of fantasy fans around the globe would be intrigued by.

It follows similar studies by Bristol climate scientists looking at the weather and climate of fantasy worlds depicted by Game of Thrones and Lord of the Rings.

The Wheel of Time world is set 18,000 years into the future, and the scientists show that even after this amount of time, climate change is still present, despite natural climate cycles counteracting the climate effect. For example, nowhere on the land are temperatures cold enough for it to snow, so no white Christmas for the Wheel of Time inhabitants.

They show the weather of the world has changed considerably due to changing mountain ranges. The jet stream of the world is more chaotic than modern day Earth, and surface wind patterns show microscale meteorology happening when the Wheel of Time events take place.

Professor Dann Mitchell from the University of Bristol’s School of Geographical Sciences and Cabot Institute for the Environment, led the study.

He said: “The timescales that greenhouse gasses stay in the atmosphere are extremely long. For every four tonnes of carbon-dioxide we emit into the atmosphere today, one ton remains for 20 millennia. This is the legacy that we are leaving our ancestors' way in the future.”

“Our climate models are based on fundamental physics, so given enough information about a planet, we can model it. It’s incredible to see such a famous world such as Wheel of Time come to life using these tools. For instance, the katabatic winds on the largest mountains, or the swirling jet streams that bring us so many winter storms.”

“Our study is intended to reach an audience outside of the traditional science networks. By looking at the climate change problem in the context of the hugely popular Wheel of Time world, it adds a different level of accessibility into how we understand climate.”

Co-author, Dr Rebecca Atkinson from the University of Sussex, added: “We face significant psychological barriers in translating climate knowledge to climate action, not least because of the difficulty in understanding the long-term impacts of climate change – our ability to comprehend the passage of time starts to fail over longer time spans.”