Scientists simulate the climate of Game of Thrones 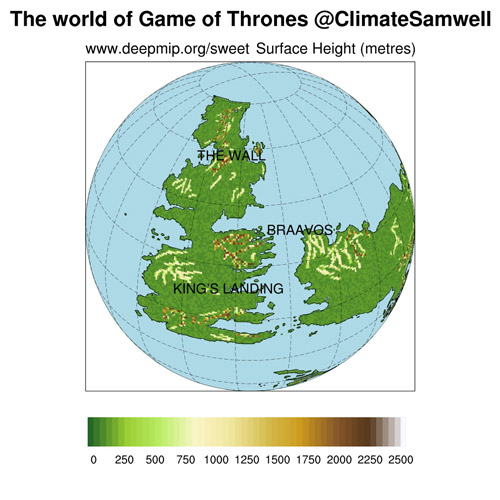 The world of Game of Thrones, showing the positions of the continents over the globe. Light blue represents the ocean, and the colour scale over the continents shows the height of the mountains and hills. This information is needed by the climate model because the surface characteristics such as height and reflectivity have a strong influence on atmospheric winds and temperature. Dan Lunt, University of Bristol 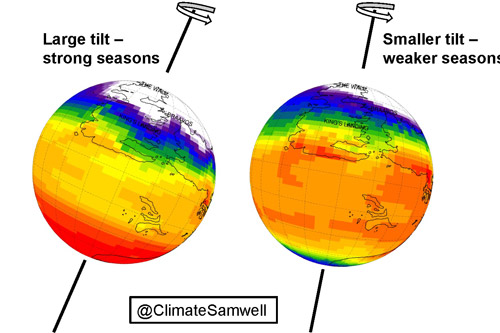 The angle of the tilt of the spinning axis of the planet dictates the severity of the seasons. A larger tilt results in strong seasons, whereas a smaller tilt results in weak seasons. The climate model results show that although the seasons in the Game of Thrones last many years, the tilt of the planet must be relatively small, because otherwise the permanent seasons would result in super-warm temperatures in the summer hemisphere, approaching 100 degrees Celsius. Dan Lunt, University of Bristol 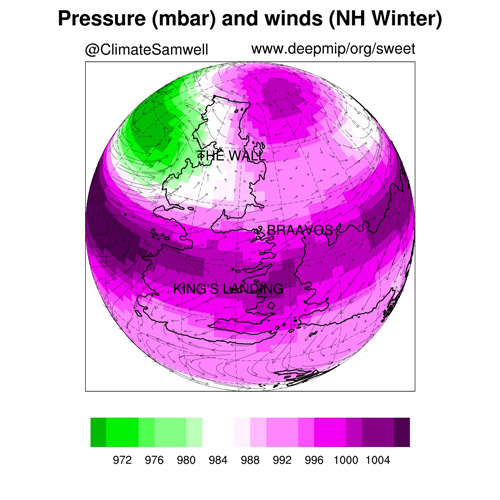 Sea-level pressure and winds predicted by the climate model for winter in the Northern Hemisphere. The colour scale shows the pressure in millibars, and the black arrows show the winds. The strong winds generated by pressure differences west of Westeros bring in strong winds to the Iron Islands, explaining the naval prowess of the Ironborn. Dan Lunt, University of Bristol

Winter is coming...as anyone who watches the hit TV series, Game of Thrones, knows.

Some even have their own theories for what causes the strange extended seasons in that world of dragons, kings, queens, and magic.

But scientists from the Universities of Bristol, Cardiff, and Southampton have gone one stage further, by using a Climate Model to simulate and explore the climate of the world of Game of Thrones.

The wind speeds and directions predicted by the climate model explain phenomena such as the dominance of the seas by the Iron Fleet, the likely attack plans of invading dragon hordes from Essos, and the trading routes between Westeros and the Free cities across the Narrow Sea.

The temperatures predicted by the climate model indicate the likely hibernation zones of White Walkers in summer.

The full results are published in a mock journal article (also available in Dothraki and High Valyrian), written by Samwell Tarly, who is studying to become a “Maester” in the Citadel in Oldtown in Westeros.

Samwell shows that the extended seasons can be explained by a ‘tumbling’ of the tilt of the spinning axis of the planet as it orbits the Sun, in such a way that that the same Hemisphere always tilts towards the Sun.

He also models the global warming that would occur if concentrations of greenhouse gases in the atmosphere were to be doubled (due to increases in carbon dioxideand methane emissions from dragons and the excessive use of wildfire).

His estimate of 2.1oC global warming for a doubling of carbon dioxide (the “Climate Sensitivity” of the world of Game of Thrones) is within the range predicted by the Intergovernmental Panel on Climate Change for the ‘real’ Earth, of 1.5 to 4.5oC.

Professor Dan Lunt, from the School of Geographical Sciences and Cabot Institute at the University of Bristol said: “Because climate models are based on fundamental scientific processes, they are able not only to simulate the climate of the modern Earth, but can also be easily adapted to simulate any planet, real or imagined, so long as the underlying continental positions and heights, and ocean depths are known.”

Professor Carrie Lear from Cardiff University added: “This work is a bit of fun, but it does have a serious side. Climate models simulate real physical processes which operate in both cooling and warming climates.  Scientists working on the SWEET project (www.deepmip.org/sweet) are using exciting novel techniques to reconstruct the climate of super-warm states of Earth’s past.

“They are using this information to test state-of-the-art climate models under conditions of high atmospheric carbon dioxide concentrations, similar to those expected by the end of this century.”

Professor Gavin Foster, from the University of Southampton, said: “The Intergovernmental Panel on Climate Change have shown that climate models can successfully simulate climates from the freezing world of the last Ice Age, to the intense warmth of the ‘Eocene greenhouse’, 50 million years ago. These same models are then used to simulate the future climate of our planet.”

‘The Climate of the world of Game of Thrones’ (PDF) by Samwell Tarly, published in the Philosophical Transactions of the Royal Society of King’s Landing, describes the results in full, and a translation is available in Dothraki (PDF) and High Valyrian (PDF).

Here, followers will be able to suggest additional climate model experiments for Samwell to carry out, and discuss the results with other Game of Thrones fans.

The model simulations were carried out on the supercomputers of the Advanced Centre for Research Computing at the University of Bristol. They were not funded in any way, and were set up in the author’s spare time.

The Cabot Institute at the University of Bristol carries out fundamental and responsive research on risks and uncertainties in a changing environment. Its interests include natural hazards, food and energy security, resilience and governance, and human impacts on the environment. Its research fuses rigorous statistical and numerical modelling with a deep understanding of interconnected social, environmental and engineered systems – past, present and future. It seeks to engage wider society – listening to, exploring with, and challenging our stakeholders to develop a shared response to twenty-first century challenges. Interested in hearing more about our environmental research? Sign up to Cabot Mail here.

For those wishing to learn more about future climate change, the IPCC provides a very accessible Summary for Policymakers. The full IPCC reports are also available free of charge.

For those who wish to pursue a study of climate, and its interactions with policy, the University of Bristol run an MSc in ‘Climate Change Science and Policy’.