ESTEL is a groundwater flow and contaminant transport model developed in partnership with the Research and Development unit at Electricité de France. ESTEL has been used for applications ranging from hillslope hydrology to the study of nuclear waste disposal (see the examples below). Two versions of the model are available: ESTEL-2D and ESTEL-3D.

The following examples illustrate some of the capabilities of ESTEL: 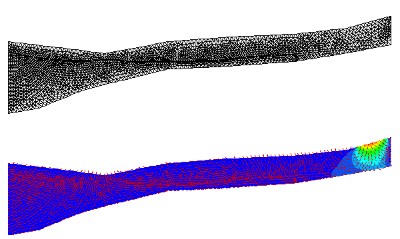 The hydrology group uses ESTEL to study hillslope hydrological processes. In this particular example, ESTEL-2D was used with various plausible model set-ups (initial conditions, boundary conditions, soil types) to understand how the modelled dynamics of the hydrological system are affected by modelling decisions. 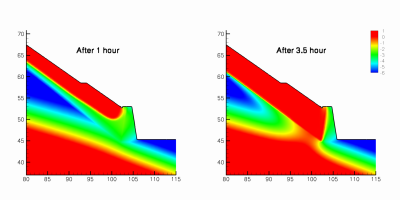 In this particular example, ESTEL-2D was used to understand how the water pressure evolves behind an undrained retaining wall during heavy rainfall in Hong Kong. In particular, it was discovered that after roughly 3 hours of rainfall, the perched water table created by infiltration and the deep water table started to connect which could cause problems for the stability of the retaining wall. 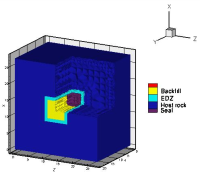 At EDF, ESTEL-2D and ESTEL-3D are used to understand and evaluate the migration of radio nucleids from a deep nuclear waste disposal site for hundreds of thousands of years. The results are regularly benchmarked against other groundwater models. This work is of great importance to be able to design and build nuclear waste disposal sites that will be safe for generations.

The Hydrological research Group has an instrumented field site on the floodplain of the river Severn, Shropshire, UK. ESTEL-2D was used to model the infiltration of a flood in the floodplain and the results showed very good agreements with the measured data.