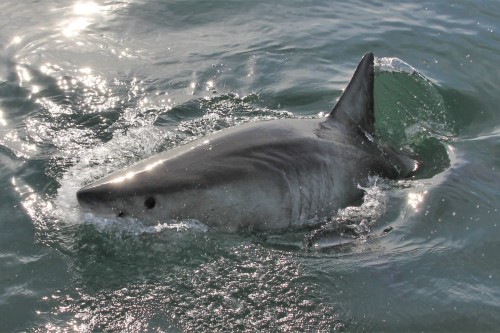 Scientists have found more evidence to support the mistaken identity theory’ in juvenile white sharks during surface attacks on humans.

Research, which has been published in the Journal of the Royal Society Interface, suggests that sharks mistake humans for seal prey.

Shark attack on humans have long fascinated the general public but have remained a source of confusion for scientists. This is due to the fact that they often bite, but do not subsequently eat, their human targets.

To help unlock this mystery, a team from Macquarie University, in collaboration with the University of Bristol created a virtual white shark visual system. Videos of human and seal movements filmed from below the water’s surface were then processed in with this system to see visual motion and shape cues through the perspective of a white shark.

“Until now, the potential similarity between humans and seals has been assessed based on human vision. However, white sharks have much lower visual acuity than us, meaning they cannot see fine details, and lack colour vision” explained Dr Laura Ryan, the lead author on the paper. “In these experiments, we were able to view the world through the eyes of a white shark.”

Dr Martin How of Bristol’s School of Biological Sciences said: “We used a computer simulation to compare the way that seals, swimmers and surfers move on the water's surface, when viewed from the perspective of white sharks below.

"These models show very little differences between humans and seals, suggesting that sharks may easily misidentify their target."

From the perspective of a white shark, neither visual motion nor shape cues allow an explicit visual distinction between seals and humans, supporting the mistaken identity theory behind some bites. The mistaken identity theory is thought to be most relevant in juvenile white sharks, as they are responsible for a large proportion of bites on humans. Furthermore, this is the age at which white sharks begin to incorporate seals into their diet.

This research could question the morality of the destructive measures often taken to reduce shark frequency, suggesting they could be unwarranted. “Understanding why shark bites occur can help prevent them. In fact, the findings of this study have inspired the design of non-invasive vision-based shark mitigation devices, which are currently being tested,” concluded Laura.

‘A shark's eye view: testing the mistaken identity theory behind shark bites on humans’ in Journal of the Royal Society Interface by Dr Laura Ryan and Dr Martin How et al.