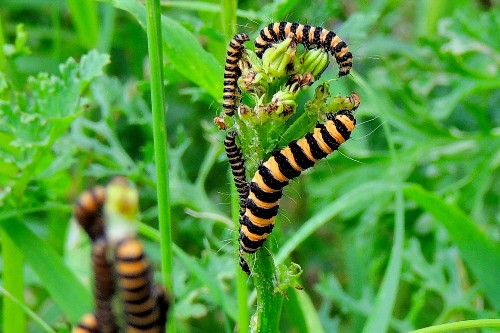 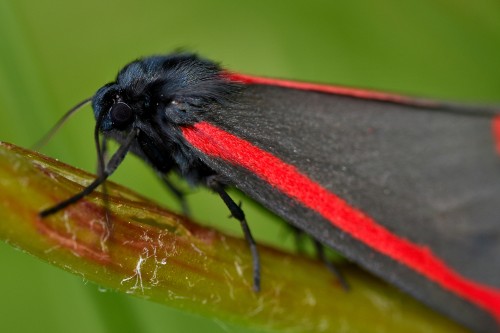 An adult cinnabar moth on a ragwort stem Callum McLellan 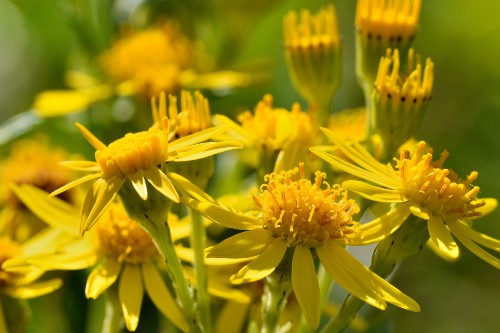 Scientists have discovered that birds know to avoid the plants where toxic animals dwell.

Young birds that eat insects with conspicuous warning colouration to advertise their toxicity to would-be predators quickly learn to avoid other prey that carry the same markings. Developing on this understanding, a University of Bristol team have shown for the very first time that birds don’t just learn the colours of dangerous prey, they can also learn the appearance of the plants such insects live on.

To do this, the scientists exposed artificial cinnabar caterpillars, characterised by bright yellow and black stripes, and non-signalling fake caterpillar targets to wild avian predation by presenting them on ragwort and a non-toxic plant - bramble, which is not a natural host of the cinnabar. Both target types survived better on ragwort compared to bramble when experienced predators were abundant in the population.

They were also interested in whether birds use the bright yellow flowers of ragwort as a cue for avoidance. They tested this by removing spikes of flowers from the ragwort and pinning them onto bramble, then recording target survival on either plant. In this second experiment, only the non-signalling targets survived better on plants with ragwort flowers, compared to the same plant type without the flowers. The survival of the cinnabar-like target was equal across all plant treatments

Lead author Callum McLellan, a graduate student at the School of Biological Sciences, said “Cinnabar caterpillars have this really recognisable, stripey yellow and black appearance. They also only live and feed on ragwort, which itself has distinctive yellow flowers. We have shown that birds learn that the ragwort flowers are a cue for danger, so can avoid going anywhere near toxic prey. It’s more efficient to avoid the whole plant than make decisions about individual caterpillars.”

Prof Innes Cuthill, who conceived the study, added “Interestingly, any camouflaged caterpillars living on the same plant also benefit from birds’ learnt wariness of ragwort, despite being perfectly good to eat.

“Our results provide the opening to a brand-new discussion on how toxicity initially evolved in insect prey, and the conditions under which warning colouration is, or is not, favoured.”