Strengthening teaching and learning in schools in Tanzania and Rwanda

Our research is strengthening English-medium school education in sub-Saharan Africa.

Many children in Sub-Saharan Africa start their education in an African language and transition to using English as the language of instruction either in primary or secondary school. In Rwanda this transition was happening after three years of primary education. In Tanzania, it occurs at the beginning of secondary school. Previous research shows that the majority of children have only limited proficiency in English at the point of transition. However, this is not explicitly recognised in policy or practice. Hence, school textbooks use language well beyond the actual reading level of students, moreover subject teachers, other than language specialists, have few strategies to support these learners.

Historically, there has been a ‘sink or swim’ approach to language transition as policy assumes learners are already fluent in English. However, research has consistently shown that this is far from being true for the majority of learners. Much of this previous research has advocated for change to the language policy. From an educational perspective, this makes sense but has not yet been accepted as politically attractive to governments. Researchers in Bristol collaborated with partners in East Africa to confront the widespread challenge of English fluency head-on. They started in 2013-2014 by designing prototype textbooks that are accessible to learners and support language learning as an integral part of subject learning. These books use ideas and techniques used in English Medium Instruction elsewhere and adapt these to the East African context. Since 2016, University of Bristol researchers have also worked alongside teacher educators in two universities in Tanzania (the University of Dodoma and St. John’s University of Tanzania) to integrate the theory and practice of LSP into teacher education programmes.

Within initial teacher education, the use of LSP has led to a shift from mainly lecture-style teaching to a participative approach that pays close attention to students’ use of language in discussion, presenting, writing and reading. Students are expected to read before the teaching session and then spend time in the session discussing ideas or demonstrating and discussing how they would teach sections of the secondary school syllabus. Learners are encouraged to draw on a shared African language in discussion but to present formally in English within an affirmative classroom climate, where common errors in grammar and pronunciation can be corrected by a language specialist or fellow students. When students discuss informally in a language in which they are already fluent, then complex concepts can be processed and related to everyday life, as opposed to just memorising as abstract knowledge. When students are no longer made to feel embarrassed for their mistakes when they do speak in English, they practice speaking in English more often and improving language skills becomes an important part of any learning.

In Tanzania, two universities (University of Dodoma and St. John’s University of Tanzania) and three teacher education colleges have adopted the approach, reaching around 5,000 student teachers. As a result of this change, student teachers are much more confident speaking in English, they can express concepts with greater clarity, and they are implementing language-supportive practices in secondary school classrooms during placements in schools, which is an important element of their training. As highlighted by the Vice Chancellor of St John’s University: “the use of LSP [has] equipped both teacher educators and student teachers with knowledge and skills to implement LSP in secondary schools hence improve teaching and learning activities”. At the University of Dodoma, the approach has now been used in postgraduate programmes for Nurse Educators and in the teaching of undergraduate Physics.
Meanwhile in Rwanda, a dissemination workshop attended by policy-makers from the curriculum and materials division of the Rwandan Education Board has led to increased awareness amongst policy makers of the linguistic needs of learners, while advocacy by the British Council has led to changes in textbook procurement guidelines. LSPs have since been introduced to textbook publishers in both Tanzania and Rwanda, as well as international textbook developers.

Mathematics and science textbooks for the first year of secondary school in Tanzania are currently being developed by a Tanzanian publisher, while Rwandan publishers have integrated aspects of the approach into textbooks for upper primary students. Roundtable meetings hosted by the British Council have also resulted in the Oxford University Press South Africa indicating that our research insights would be embedded into their work through the inclusion of more ESL (English as a Second Language) speakers on authorship teams.

Bristol continues to collaborate with Dodoma and St. John’s as they seek to establish a professional association that will promote LSP, nurture ongoing innovation and support collaboration between school-based teachers and teacher educators. Our research has continued to develop insights into LSPs and knowledge of how different aspects of language proficiency influence understanding and pedagogical knowledge amongst new and existing secondary school teachers. This has the potential to support strategies for improving the quality of education for children in classrooms across multiple countries in sub-Saharan Africa.

This work is based on projects undertaken by researchers from the Centre for Comparative and International Research in Education (CIRE). The first, Language Supportive Teaching and Textbooks (LSTT) project (2013 – current) in Tanzania is now entering Phase 3. It has developed a new approach to secondary school textbook design and strategies for teacher education. The Language Supportive Textbooks and Pedagogy (LAST) project in Rwanda (2014-2016) developed a pedagogic approach to design primary school textbooks.

Both these projects have developed innovation that responds to problems described by earlier research projects. Language and Literacy, was one of five projects within the Bristol-led EdQual Research Programme Consortium. This study of the transition from the use of African language in primary education to English in secondary education found that students were poorly prepared for the language transition and that textbooks used language beyond their reading level. Following this, the Student Performance in National Examinations (SPINE) project in Zanzibar showed that after two years of English-medium secondary school, most students could not demonstrate their understanding of science in either English or Kiswahili. SPINE demonstrated the link between instructional language transition and examination performance.

Centre for Comparative and International Research in Education (CIRE) 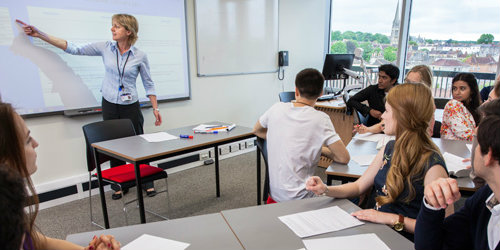 Join us in improving educational environments for future generations