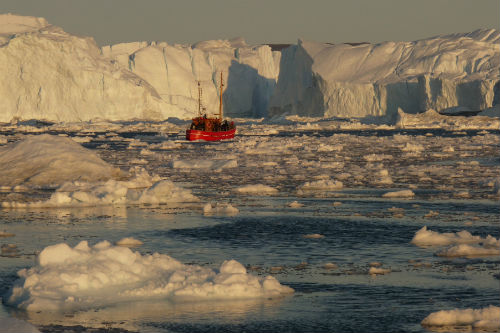 Morass of icebergs that have calved off Jakobshaven, the largest glacier in Greenland. Professor Jonathan Bamber, University of Bristol 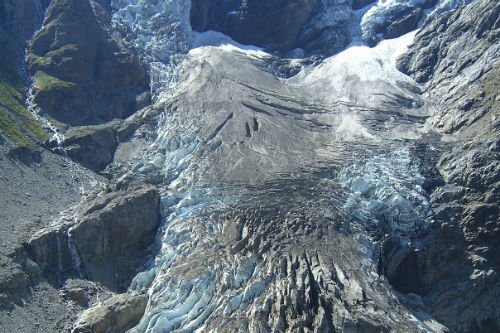 A new study led by scientists from the University of Bristol has provided an up-to-date insight into the impact of melting land ice on sea levels.

The new estimate shows there has been a six-fold increase in annual land ice contribution to global sea level rise from the mid-1990s to the early 2010s.

Land ice describes permanent ice on the surface of the Earth, which comprises the two ice sheets that cover Antarctica and Greenland as well as numerous smaller glaciers and ice caps.

Over the course of the 20th century, melting glaciers and ice caps dominated the overall contribution of land ice to global sea level rise.

This new study, to be published next week in the journal Environmental Research Letters, but already available online, suggests that for the most recent five-year period (2012-2016), land ice contributed around 1.85 mm per year to global sea level rise. The largest source was Greenland (37 percent of the total, or 0.69 mm per year) followed by glaciers and ice caps (34 percent or 0.63 mm per year). Antarctica contributed the remainder, with the vast-majority from West Antarctica (26 percent or 0.48 mm per year).

Since 1992, there has been a revolution in our ability to measure the land ice contribution to sea level rise using satellite observations.

However, different satellite sensors have provided unique and sometimes conflicting results, and as a result the many published estimates of land ice trends have provided a confusing and often inconsistent picture.

Since then, considerable advances have been made in understanding the origin of the inconsistencies, reducing uncertainties in estimates and extending time series, yet this study is the first that has attempted to combine post-AR5 estimates in a rigorous and holistic way.

The new estimate draws on published literature, primarily focused on studies published since 2013, expert assessment of that literature, and a new analysis of Arctic glacier and ice cap trends combined with statistical modelling.

Lead author Professor Jonathan Bamber from the University of Bristol’s School of Geographical Sciences, said: “Our analysis draws on many earlier studies along with new, previously unpublished data and shows that in just over two decades land ice has gone from making a modest contribution to being by far the dominant source of sea level rise.

“It is intended as comprehensive review of our understanding of current land ice trends and their contribution to contemporary sea level rise.

“It is also, as far as we are aware, the first study since IPCC AR5 (published 2014) that has attempted to combine post-AR5 estimates in a rigorous and holistic way. In this sense it should be of considerable interest to the community, providing an updated and extended synthesized estimate of a key component (land-ice) of the sea-level budget.”

The authors were funded as part of a five-year European Research Council project, GlobalMass (www.globalmass.eu), which aims to – for the first time at a global scale – rigorously combine satellite and in-situ data related to different aspects of the sea level budget, so that observed sea level rise can be attributed to its component parts.

‘The land ice contribution to sea level during the satellite era’ by J. Bamber, R. Westaway, B. Marzeion and B. Wouters in Environmental Research Letters