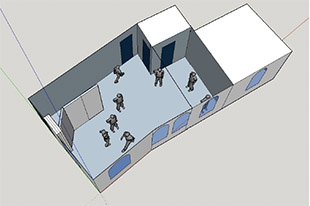 “Ideas are the currency of the twenty-first century.” This is the opening line of “Talk like TED” by Carmine Gallo, one of the best public speaking books I recently laid my hands on. This is also one of the most important reasons for which I chose Bristol’s Innovation Degree over other courses in the UK. I was convinced to apply here by the promise of being the ones to create a better future. I was convinced that this course would enable us to become the creators of the future, our future. We would study everything from how to design your idea to how to have a successful product launch, all with the end goal of being able to start our own business down the line. And that’s precisely what we did.

From my point of view, this term’s unit had a very clear goal in mind: to have us working directly with various clients. Raw, unmediated relationships, just like in the real world. In many ways this is the stepping stone in the land of innovation that we are entering. Right from the very beginning I was excited about the opportunity of working on the VR Labs team. The goal of the project was for us to redesign the interior space of a newly opened VR (Virtual Reality) Lab in Bristol (hence the team name), with the space being a collaboration between the University of Bristol, the University of the West of England, Watershed and @Bristol. The end goal of the project as presented was to create a space where designers, creators and visionaries can come together and find new applications for VR.

Being passionate about new technologies and the way in which those can be used in order to improve people’s lives, I had already sketched some ideas before our first client meeting based on pictures I could find online of the space. At the time, I was under the impression that the project would be an easy interior remodelling project with the only caveat being that we needed to take some technological aspects into account. As time showed, I couldn't have been more wrong. The first roadblock was a totally unexpected one. The client allowed us total freedom. Initially, you would think that this is a great thing to be offered. After all, creative freedom is the very thing we all crave for. You can come up with new methods and techniques for them to use, you can redesign the lab space in your own voice or come up with a great idea and create the best overall VR experience. It all sounds great. The downside here is the vastness of the problem space total and outright uncertainty: “Will they like the idea?”, "Is the solution we’ve come up with really solving an important issue they have?” and so on.

Our problem was quite profound. We had the opportunity to reorganize the whole office space. After a bit of thinking, we decided that actually, that was totally unfeasible. “Why?” you might ask. First of all, if we were to redesign the whole space, we would have spent all our free time on this project. On the other hand, by dedicating a smaller amount of time to the same gargantuan task, we would end up with a terribly diluted and vague result, a result from which no conclusions could be drawn and no recommendations sent out to the client (after all, the purpose of the consultant is to offer suggestions that the client can then take and implement in order to enhance their business). Once we fully understood the complexity of the task we were given, we set to work. We first had to decide which part of the lab we would spend most of our time designing and which aspects of the user experience were the most important to try to improve. We decided to use an “à la carte” approach, where the client can pick and choose different aspects of different concepts we would create. In short, everything was interchangeable.

Fast forward a month, leaves were beginning to fall from the trees and we were really stuck. This unfortunate creative impasse was due to a combination factors and events. For one, we were not able to decide on what the most important aspect that we wanted to improve in our solution was. This lead to continuous friction between those who believed we should focus on the feel of the space and those who believed practicality to be more important. Even more, the team was spread thin, with members being away or working on multiple projects at a time. I can most definitely say that this dilution did not help the project in any way. What helped the project though, were the interviews we conducted. One of them stands out as especially important for me. It is an interview I conducted with a Computer Science professor who dubbed as UoB’s liaison with the lab. During the interview, we discussed many interesting options for the future expansion of the lab, but also came up with two very important ideas for the project. One of them was connected to the notion of sharing the immersive VR experience to a larger audience. The problem is that the VR experience is lost or horribly diluted if the viewer is not surrounded by image, thus making VR sharing on a large scale pretty difficult. The solution we found was to use the nearby Planetarium in order to project the images that the VR player would see onto the dome-like structure. This meant that the full VR experience could be shared with a sizeable audience without losing the immersive aspect. Another idea that came up, and perhaps the most important one, was connected to how “open” the space we were designing really was. The main concern here was that people with non-technical backgrounds would be discouraged from using the lab because of their lack of prior knowledge in the field of VR. We thus spent the next couple of weeks trying to come with the most balanced solution and create the most inviting space possible.

No matter if we are ready or not, each project has a deadline, and we were approaching ours rapidly. We decided to ditch the “à la carte” approach and go for 3 cleaner designs that represented different stages in the lab’s life and development (for instance the third design was centered around the idea of making the most out of the given space as we believed that as the lab gained popularity the available space will quickly become insufficient for all the projects and people). The most interesting part was assembling the final presentation. I use assemble because this is what it felt like putting together all the pieces of this spread out puzzle. With each presentation, we try to push the bar even higher. For this one, we used 3D mockups in order to illustrate the final ideas in a clean fashion. After showcase events such as this one I sometimes wonder what is it that we’ll do next time in order to push that bar higher. (If you have any recommendations please send them to bip-info@bristol.ac.uk and reference Mattei's Blog.)

In the end, I believe it’s not about asking “What does the client want?” but rather “Why does the client want this and how can I improve what I am offering?”. This is one thought I would like to leave you with. It is closely related to the design process as it can follow the same stages and the answers to this question, much like in the case of the design brief, can be much harder to get than previously anticipated.

Matei has worked with Bristol VR Lab as part of the second-year client-let briefs unit and is studying Computer Science with Innovation (MEng). Computer science is having a huge impact on the technology that is shaping our society and the way that we live. The Innovation Programme is designed to give you the skills and knowledge you will need, combining the fundamentals of Computer Science with an understanding of how to turn ideas into plans for digital and creative enterprises, both social and commercial.