Tracers are compounds that are used to "track" air movements in either the urban environment or over a wider range and entail short or medium-term release of selected tracers over a range of defined topography.  Typical urban measurements are made over distances up to 1km whereas longer range experiments have involved distances of over 100km. The typical longer range experiments carried out by the group involve distances up to 18km. Tracers inherently are compounds that are not normally present in the atmosphere, or present at very low levels. The principle of tracer work is to release the tracer at a level that will ensure a concentration of tracer at the receptor (sampling site) of at least 10 times the background concentration. The tracers used by the group are a range of compounds called perfluorocarbons which have been found to have normal atmospheric concentrations in the order of parts per quadrillion (1 in 10-14 ) or lower.  Other tracers used include sulphur hexafluoride (SF6) and carbon dioxide all of which are unreactive, non-toxic and non-flammable chemicals, completely safe to release within an urban environment..  The experiments help to determine the dispersion effects of pollution on (for example) street canyons and other urban situations. Such dispersion studies, in conduction with appropriate meteorological understanding increases the ability for prediction of dispersion patterns within complex terrain. 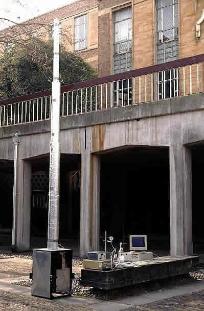 The various distances involved in the work require different release techniques in order to cope adequately with the quantities of tracer that are needed to be released. The equipment shown in the picture on the right was designed for the URGENT campaign - a medium range release of tracer up to 18km - which required direct release of a liquid tracer - in this case a perfluorocarbon such as perfluoromethylcyclohexane - where a release of several grams of tracer over a time span of a few minutes is required in order to achieve a suitable concentration for analysis in the final sample.

Over shorter distances - such as street canyon simulations or the road intersection for DAPPLE - an alternative approach is adopted and a tracer/air mixture is released from a pressurised can.

In either case the release rate is monitored - by weight in the case of liquid release and by pressure decay for the air/tracer mix - to determine how much tracer has actually been released. The MkII liquid release kit is described later.

The tracer dispersion programs rely on efficient and fast sampling of air samples which can be subsequently stored for later analysis in the Bristol laboratories. Two main air samplers are employed in our studies, both types are designed to be fully automated for unattended operation. 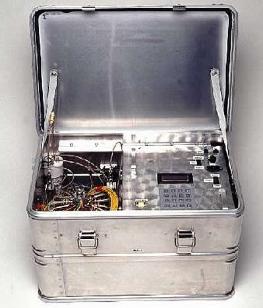 Macrotrap samplers evolved from our experience using adsorbent technology to selectively remove target analytes from air sampled outlined in the ADS technology section. Air samples of 3 Litres are directed to one of 15 adsorbent-filled macrorotraps mounted on a central sampling valve. After sampling, the trap is isolated until analysis. The method entails heating of the macrotraps under nitrogen flow directed into the ADS for refocusing prior to GC-MS separation and detection. Macrotrap samplers are used where the sampling time interval is large (20 min per air sample or greater) at a variety of sampling flow rates (up to 500scc/min)  and is particularly useful when determining the decay curve once the tracer release has been terminated. They are designed to be self contained, are powered either by mains electricity or a small lead acid battery and therefore can be used in a variety of locations

A macrotrap air sampler, these selectively trap tracer compounds onto adsorbant tubes, the tubes can then be returned to the ACRG for analysis. 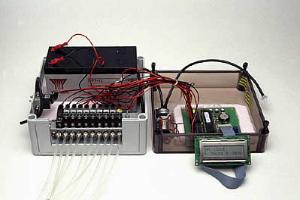 Bag samplers are simple devices designed to sequentially fill Tedlar bags in an automated manner. Internal pumps flush the air sample stream through a ladder block plumbing arrangement and flow is diverted using micro-solenoid valves for each Tedlar bag. The ladder samplers can accommodate 10 bags each and during tracer release campaigns we deploy up to 10 ladder boxes. Filled Tedlar bags can be swapped for fresh ones by an operator in experiments requiring more than 10 air samples at a ladder location. 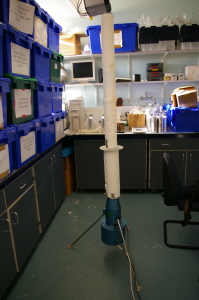 Much of the original release and sampling equipment, although portable, was relatively heavy and therefore not easily set up by one or two people.

The liquid release kit has been substantially redesigned and is now much more portable - the dispersion unit and temperature control unit can now be carried in a single "tea crate" type storage box.

Sampling has also been changed by the introduction of portable sampling units (SKC universal pumps). Although these are for single bags, modification of the sampling protocol allows multiple bag samples to be taken by a single operator over varying lengths of time. Samples can be as short as 3 mins with a 30 second interval between samples.