Islet cell autoantibodies and what they tell us

Islet autoantibodies are markers that appear when insulin producing beta cells in pancreas are damaged. They can be detected a long time before beta cells are completely destroyed.

We use autoantibodies to estimate an individual’s risk of developing type 1diabetes.  This information can be used to select people who are potentially eligible to take part in clinical trials testing potential treatments that might delay or prevent type 1 diabetes. Islet autoantibody testing can also to help clinicians classify the type of diabetes and decide on the best treatment in people in whom this is not clear. 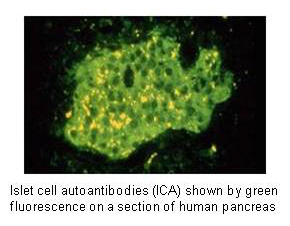 The first islet autoantibodies to be discovered were those that bound to the islet cells of human pancreas.

A very early finding of our research group was that the immune system started producing autoantibodies a very long time before someone developed diabetes.  This suggests that, even if autoantibodies are present, there is a big ‘window of opportunity’ to delay or prevent type 1 diabetes if effective treatment to slow the underlying autoimmune process becomes available  (Lancet 1981) This finding has provided the rationale for all the subsequent research aiming to prevent the condition.

The test for ICA has been very useful for identifying those people who are likely to progress to diabetes, but has now been largely superseded by tests for autoantibodies to specific proteins found in the islet. 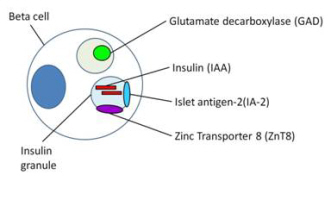 The islet autoantibodies that we currently measure bind to:

We have developed sensitive radiobinding tests to measure these autoantibodies in blood samples.  Some people who will never develop diabetes may have detectable levels of antibodies to one of these islet proteins. The risk of developing diabetes is greatly increased when two or more antibodies are present (Diabetes 1997). We therefore estimate risk based on the combined results of testing for 3 or 4 antibodies. Counting the number of antibodies detected has proved to be a highly accurate method of predicting who is likely to develop type 1 diabetes in the future (Diabetes Care 1999).

Islet autoantibodies often appear in a particular sequence, with insulin or GAD autoantibodies developing first, sometimes as early as 6 months of age, to be followed by IA2 and ZnT8 autoantibodies. This spreading of autoimmunity to different islet proteins indicates that the process leading to destruction of the insulin producing cells is progressing. Further, progression is also marked by the development of antibodies that recognize different regions of the target islet proteins 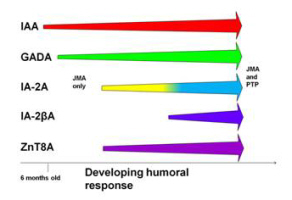 ZnT8A are the most recently identified islet autoantibodies. To determine how what these novel markers added to diabetes prediction, we measured ZnT8A in ENDIT participants. We found that although adding ZnT8A measurement to all the other antibodies did not improve prediction in the majority of relatives, ZnT8A were useful additional risk markers in relatives at low genetic risk of diabetes and older individuals (J Clin Endocrinol Metab 2012)

Insulin autoantibodies (IAA): To improve antibody testing, we developed a microassay that allows us and other scientists to measure insulin autoantibodies (IAA) very accurately using very small volumes of serum or plasma.  Insulin autoantibodies are very important, as they are often the first autoantibody that can be detected in early childhood. Previously, assays required relatively large volumes of serum, which made them unsuitable for screening young children and large populations.  Our microassay is now being used throughout the world (Journal of Autoimmunity, 1997) but we have gone on to refine the assay and make changes that further improve the sensitivity (Journal Immunol Methods, 2006) and specificity of the test (Journal  Immunol Methods, 2010). Recently we have also confirmed that assessing IAA affinity with a simple test can further improve our ability to predict diabetes (Clin Exp Immunol, 2012). By continually improving our assays, and assisting other researchers to do the same, we hope to further improve the prediction of diabetes and the standardisation of assays between laboratories.

Antibodies to IA2: During our investigation into assay methods, as part of the autoantibody harmonization program, we discovered that two common assay reagents could reduce binding of autoantibodies to IA2 (Journal Immunol Methods, 2009). This finding has implications for assay stability, but also focused our attention on the importance of the amino acid cysteine to IA2 autoantibody binding (Diabetes, 2012).

We are interested in the relationship between the autoantibodies that a person develops and their diabetes susceptibility genes. It has been known for a long time that people with HLA DRB1*04 alleles have increased levels of IA2 autoantibodies at diagnosis of type 1 diabetes. We found that patients with HLA DRB1*09 alleles were also more likely to develop IA-2 autoantibodies, while IA-2 autoantibodies in patients carrying HLA DQB1*02 alleles were less likely to bind to the JM domain. We also found that that IA2 autoantibody development was increased in patients carrying the neutral risk HLA DRB1*07 allele (Diabetologia, 2008) This suggests a dissociation between diabetes risk alleles and the autoantibody response once immune regulation had broken down.

Girls and boys have a similar risk of developing type 1 diabetes, but men are more likely to develop the condition than women. To understand why, we looked at autoantibodies by gender in the ENDIT screening cohort of first degree relatives of patients with type 1 diabetes. We found that adolescent and young adult males were more likely to have ICA than adolescent or young adult females (Diabetologia, 2002). We also found that, at diagnosis of type 1 diabetes, boys in late adolescence were more likely to have insulin autoantibodies (Diabetologia, 2003). This indicates that boys may be more susceptible to developing islet autoimmunity during adolescence.

Changes in autoantibodies over time

We are interested the relationship between islet autoimmunity and the increasing incidence of childhood type 1 diabetes. We recently found that the frequency of IA-2 and ZnT8 autoantibodies increased during the period between 1985 and 2002 when the incidence of the condition was rising rapidly. The levels of IA-2, ZnT8 and IA-2β autoantibodies also showed an increase over this period (Diabetes, 2012). These results suggest that there is more inter- and intra-molecular spreading of the autoimmune response in patients who were diagnosed more recently.

Our group plays a major role in international endeavours to improve the performance of islet antibody assays throughout the world. We jointly co-ordinated the international Diabetes Antibody Standardization Programme (DASP) with the US Centre for Disease Control (CDC) in Atlanta.  This programme was designed to ensure that antibody testing in many laboratories around the world will give equivalent results. DASP has now been replaced by a similar programme, the Islet Autoantibody Standardization Program (IASP) and we will continue in our efforts to ensure assays are equivalent no matter which laboratory they are performed in.  Any laboratory wishing to join the IASP standardisation programme should contact Alistair Williams.

We also collaborate on national and international research projects with other laboratories and provide autoantibody results in our role as an antibody reference laboratory. These are some of our current collaborative projects: