Introducing Hard Evidence: a performance piece about survivors of domestic abuse and public involvement in research 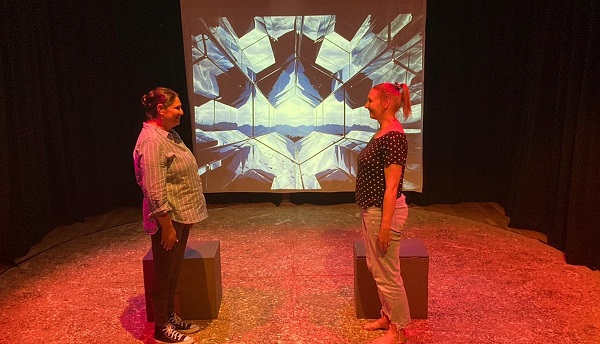 Hard Evidence, a new theatre production developed in collaboration with acta, shines light on how getting involved with research empowered women who have experienced domestic abuse to support others.

Written over Zoom in the early months of 2021, the performance follows Jan, a survivor of domestic abuse who has been a public contributor on research project, and her good friend Christine. When Jan recognises that Christine’s relationship shows signs of becoming abusive, she must use her newfound confidence to support her friend.

The piece has been written, developed and performed by Shass Blake and Alison Prince, with support from Ingrid Jones at acta. Both Shass and Ali are survivors of domestic abuse and public contributors on the COMforT (Mindfulness for Trauma) study. They wanted to show how they found being involved in research an empowering experience and to inspire others to do the same.

The COMforT study, led by Dr Natalia Lewis at the Centre for Academic Primary Care, University of Bristol and funded by NIHR Bristol Biomedical Research Centre, developed and pilot tested a trauma-specific mindfulness course for women with experience of domestic abuse and post-traumatic stress.

Nationally, it is estimated that 2.3 million adults aged 16 to 74 years experienced domestic abuse in the year ending March 2020. Both Alison and Shass have expressed a desire for the performance and its recording to be used to raise awareness of the lesser-known acts of domestic abuse such as financial control and to showcase how involvement in research can help people affected by domestic abuse.

Hard Evidence will run for two live performances at acta community theatre in Bedminster, Bristol, on Tuesday 9 and Friday 12 November from 7-8pm. Each show will be followed by a Q&A where you’ll have a chance to ask Shass, Ali, Ingrid and researchers from the study about the performance and research process.