History of our school

As well as being the birthplace of such breakthroughs as the Aharonov-Bohm Effect and the Berry Phase, Bristol also welcomed many physicists fleeing from the Nazis in the 1930s, some of whom would also receive Nobel recognition.

The first physics lecturer at University College Bristol, which would become Bristol University in 1909, was Silvanus P. Thompson, author of the 39-times-reprinted Elementary Lessons in Electricity and Magnetism and noted for his contributions to electrical engineering. His successor, Arthur P. Chattock, not only carried out definitive experiments on the gyromagnetic ratio of iron, but also gave almost every physics lecture every year.

These lectures inspired Arthur M. Tyndall, who enrolled for a BSc in 1899 and went on to become the “father” of the School of Physics. A lecturer and then professor who researched the mobility of ions in gases, Tyndall persuaded the Bristol industrialist Henry Herbert Wills to endow a purpose-built laboratory, opened in 1927, that sits at the highest point in central Bristol.

One of those who took Tyndall's lectures on the kinetic theory of gases and on “quantum theory” was Paul Dirac, who studied for a degree in mathematics at Bristol from 1921-3 and would go on to win the Nobel Prize in 1935 for his epoch-changing discoveries in quantum mechanics.

Tyndall had a wonderful nose for identifying talented individuals. In 1925 he appointed John Jones to a readership. Jones, who took on the surname Lennard-Jones after marriage, became the first professor of theoretical physics in the UK in 1927, pioneering the theory of interatomic and intermolecular forces before moving to Cambridge to become the UK’s first Professor of Theoretical Chemistry.

Tyndall’s enthusiasm for theorists led to the appointment in 1933 of the youthful Nevill Mott to a Chair, joining Harry Jones, who was already working on problems in the theory of metals. Within six months, Mott and Jones were publishing work in this field and the first edition of their classic treatise on The Theory of Metals and Alloys was published in 1936. The quantum foundations of the theory of metals and semiconductors were set down in Bristol at this time and laid the groundwork for subsequent developments in the electronic properties of solids, for which Mott shared the Nobel Prize in 1978. Mott also devised, with Ronald Gurney, the theory of the photographic process.

In the 1930s Bristol welcomed many physicists fleeing from the Nazis. Hans Bethe, Max Delbrück and Gerhard Herzberg, all subsequently Nobel Laureates for physics, medicine and chemistry respectively, spent brief periods in the Laboratory. Others, such as Herbert Fröhlich, Walter Heitler and Heinz London, stayed for several years.

After the war, Mott returned to Bristol and continued to pioneer what is now known as condensed matter physics. He brought John Eshelby and Frank Nabarro, both working on dislocations in crystals, and Jacques Friedel, Mott's future brother-in-law, who almost single-handedly introduced solid state theory into France and later became President of the Academie des Sciences.

Mott's most inspired appointee was Frederick Charles Frank, who came to Bristol in 1946, after distinguished wartime work in the Air Ministry intelligence service for which he was awarded an OBE and a knighthood. Charles Frank was a founder of the theory of dislocations and of crystal growth and surface physics. He also predicted muon-catalysed cold fusion and created the theory of the elastic properties of liquid crystals (the Frank constants) and their disclination singularities. In the 1960's he applied his expertise in solid state physics to bring fundamental new insight into several aspects of geoscience, including the curvature of island arcs.

Another Tyndall appointee, Cecil F. Powell, followed a very different strand of research, which marked the birth of modern particle physics and for which he won the 1950 Nobel Prize. Powell pioneered the use of photographic emulsion techniques to detect energetic particles. Analysis of tracks recorded on the Pic du Midi and published in a Nature article of 1947, with Lattes and Occhialini, demonstrated the existence of the p mesondecaying spontaneously to the m meson. Powell, together with Don Perkins and Peter Fowler, subsequent extended the emulsion-based work to high altitude exposures using balloons and in 1966 produced first examples of “ultra-heavy” cosmic ray particles.

The time-consuming operation of searching exposed photographic plates for interesting “events” was conducted by a large group of young girls, officially known as “scanners” but unofficially called “Cecil’s Beauty Chorus”, without whom discoveries would certainly not have been made. High-energy particle physics research and astrophysics, both current strengths of the School, can trace their origins to Powell, a man of remarkable talents who was President of the World Federation of Scientific Workers and Chairman of the Pugwash Conference for several years.

Another key appointment in this period was John Nye, who arrived in Bristol in 1953. Nye made important contributions in the plastic deformation of ice and in glaciology; a glacier in Antarctica, Nye Glacier, is named after him.

After Mott left for Cambridge in 1954, he was succeeded as Head of School by Maurice Pryce, a theorist distinguished for his work on the spectroscopy of ions in crystals. In 1957, Pryce appointed David Bohm, who brought with him his graduate student Yakir Aharonov. In 1959 they discovered that quantum electrons could be influenced by distant magnetic-flux lines. Within a year their remarkable prediction was verified experimentally by Robert Chambers, also in Bristol. Modern textbooks on quantum mechanics contain whole sections on the Aharonov-Bohm effect; it is central to the formulation of gauge theories.

The 1960's saw a rapid expansion of staff and research activity in the School. John Ziman, distinguished for his work in disordered systems and electrons in metals, accepted a Chair in 1964 and set about creating a strong theory group. One of Ziman’s first appointees was Michael Berry, who came to Bristol just after completing his PhD at St Andrews.

Berry has spent the whole of his career in the School and made seminal contributions to singular and topological optics - a subject he introduced together with Nye in the 1970's - physical asymptotics, quantum chaology and semi-classical mechanics. Following his renowned 1984 paper in which described how a quantum or classical system acquires a geometric (or Berry) phase when it is subject to cyclic adiabatic processes, examples of the Berry phase have been found in a wide variety of fields including neutron interference, light polarization and the topology of potential energy surfaces in chemistry. The Aharonov-Bohm effect is a particular example, and Aharonov and Berry shared the Wolf Prize for Physics in 1998.

Ziman also appointed Balazs Gyorffy, whose field was the electronic structure of alloys and theory of superconductivity, and Robert Evans, investigating the theory of liquids and interfacial phenomena. In 1976, Ziman brought in the experimentalist John Enderby, who pioneered neutron diffraction studies of the structure of molten salts, liquid metals and aqueous solutions. Enderby later became Physical Secretary of the Royal Society and President of the Institute of Physics.

Charles Frank continued to be an enormously influential figure. He was responsible for the arrival in Bristol in 1959 of Andrew Lang, who introduced the technique of X-ray topography and was later renowned for his investigations of defects in diamonds. One of Lang's few PhD students, Michael Hart, used near-perfect crystals of silicon to invent the Bonse-Hart X-ray interferometer that finds numerous applications in metrology.

Another Frank appointee was Andrew Keller, who had left Hungary before completing his PhD thesis and was employed by ICI in Manchester. Keller, who came to Bristol in 1955, made a major contribution to fundamental polymer science, discovering the mechanism of chain folding for polymer crystallization, based on careful studies of lamellar polymer crystals and their morphology and created a world-class group in polymer physics. Also brought in by Frank in 1967 was John Steeds, who set up a world-leading electron microscopy activity and pioneered convergent beam electron diffraction,

Nanoscience research began in Bristol in 1989 when Mervyn Miles started the development of ultra-fast scanning probe microscopy. The 1990's saw the development of new research activities in experimental particle physics and the appointment, in 1995, of Mark Birkinshaw as William P. Coldrick Professor of Cosmology and Astrophysics. The School spearheaded the new discipline of quantum information theory with the arrival of Sandu Popescu in 1999, the first in a series of appointments, across the University, in this new field. Experimental work on optical quantum computing began in 2006 with the appointment of Jeremy O’Brien who, together with colleagues in Electrical Engineering, set up the Centre for Quantum Photonics. 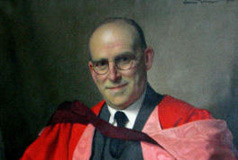 Each chapter of Histories of Physics in Bristol, R.G. Chambers and M. Hart (Eds.) is individually downloadable in PDF format: