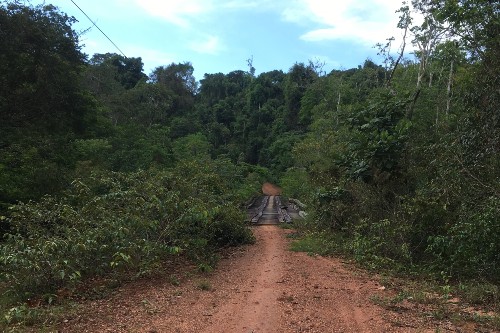 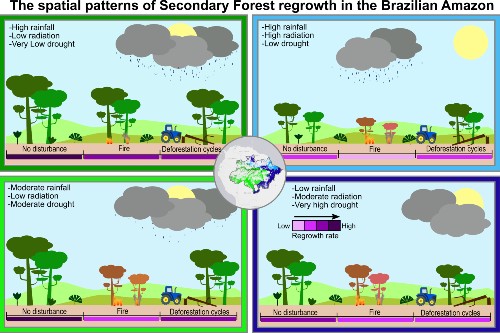 The forests, which naturally regrow on land previously deforested for agriculture and now abandoned, are developing at different speeds. Researchers at the University of Bristol have found a link between slower tree-growth and land previously scorched by fire.

The findings were published today [date] in Nature Communications, and suggest a need for a better protection of these forests if they are to help mitigate the effects of climate change.

Global forests are expected to contribute a quarter of pledged mitigation under the 2015 Paris Agreement. Many countries pledged in their Nationally Determined Contribution (NDC) to restore and reforest millions of hectares of land to help achieve the goals of the Paris Agreement. Until recently, this included Brazil, which in 2015 vowed to restore and reforest 12 million hectares, an area approximately equal to that of England.

Part of this reforestation can be achieved through the natural regrowth of secondary forests, which already occupy about 20% of deforested land in the Amazon. Understanding how the regrowth is affected by the environment and humans will improve estimates of the climate mitigation potential in the decade ahead that the United Nations has called the “Decade of Ecosystem Restoration”.

Viola Heinrich, lead author and PhD student from the School of Geographical Sciences at the University of Bristol, said, “Our results show the strong effects of key climate and human factors on regrowth, stressing the need to safeguard and expand secondary forest areas if they are to have any significant role in the fight against climate change.”

Annually, tropical secondary forests, which are growing on used land, can absorb carbon up to 11 times faster than old-growth forests.

However, there are many driving factors that can influence the spatial patterns of regrowth rate, such as when forest land is burned either to clear for agriculture or when fire elsewhere has spread.

The research was led by researchers at the University of Bristol and Brazil’s National Institute for Space Research (INPE) and included scientists from the Universities of Cardiff and Exeter, UK.

Scientists used a combination of satellite-derived images that detect changes in forest cover over time to identify secondary forest areas and their ages as well as satellite data that can monitor the aboveground carbon, environmental factors and human activity.

They found that the impact of disturbances such as fire and repeated deforestations prior to regrowth reduced the regrowth rate by 20% to 55% across different areas of the Amazon.

“The regrowth models we developed in this study will be useful for scientists, forest managers and policy makers, highlighting the regions that have the greatest regrowth potential.” Said Heinrich.

The research team also calculated the contribution of Amazonian Secondary Forests to Brazil’s net emissions reduction target and found that by preserving the current area, secondary forests can contribute to 6% of Brazil’s net emissions reduction targets. However, this value reduces rapidly to less than 1% if only secondary forests older than 20 years are preserved.

In December 2020, Brazil amended its pledge (NDC) under the Paris Agreement such that there is now no mention of the 12 million hectares of forest restoration or eliminating illegal deforestation as was pledged in Brazil’s original NDC target in 2015.

Co-author Dr Jo House, University of Bristol said “The findings in our study highlight the carbon benefits of forest regrowth and the negative impact of human action if these forests are not protected. In the run up to the 26th  Conference of the Parties, this is a time when countries should be raising their climate ambitions for protecting and restoring forest ecosystems, not lowering them as Brazil seems to have done.”

Co-author Dr Luiz Aragão, National Institute of Space Research in Brazil, added “Across the tropics several areas could be used to regrow forests to remove CO2 from the atmosphere. Brazil is likely to be the tropical country with the largest potential for this kind of Nature-based solution, which can generate income to landowners, reestablish ecosystems services and place the country again as a global leader in the fight against climate change.”

The team will now focus their next steps on applying their methods to estimate the regrowth of secondary forest across the tropics.