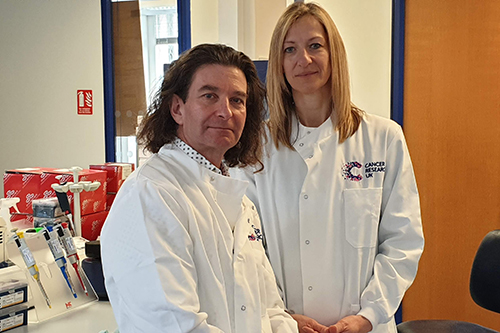 Bristol scientists have received nearly £8 million in funding from Cancer Research UK – the biggest ever research grant awarded by the charity in the city.

The money will help researchers to investigate the causes of some of the hardest to treat cancers.

With over 200 different types of cancer and one-in-two people in the UK expected to be diagnosed with the disease in their lifetime, scientists know that 40 per cent of these cases are linked to a combination of lifestyle factors which are largely preventable.

Based at the University of Bristol, the Integrative Cancer Epidemiology Programme (ICEP), is now in its fifth year, with previous funding from Cancer Research UK, having already driven significant advancements in understanding the disease and the factors that cause cancer.

This grant will enable further research work to unpick the causes and mechanisms of cancer and why it progresses in some people and not in others.

Richard Martin, Professor of Clinical Epidemiology at the University of Bristol and co-lead researcher, said: "In the last five years, the programme developed large scale studies using cutting edge statistical methods and genetic data on tens to hundreds of thousands of people to provide high quality evidence on the causes of nine cancers and their progression.

"For example, in a genetic study, our scientists found strong evidence to suggest that women who take statins in the long term could be less likely to develop ovarian cancer.

"Our findings open up the possibility of repurposing a cheap drug to help prevent ovarian cancer, especially in women, who are at a higher risk. It's incredibly interesting that women whose bodies naturally inhibit the enzyme targeted by statins have a lower risk of ovarian cancer. However, until we get the results of further trials we don’t yet recommend that anyone rushes to take statins solely to prevent ovarian cancer because of this study."

There is no test that reliably picks up ovarian cancer at an early stage, so chemoprevention – using drugs such as statins to lower a person's risk of developing the disease – could be an important approach to saving lives.

The study used Mendelian randomization, which involves analysing the genetic data from thousands of people.

Dr Rachel Orritt, Cancer Research UK’s health information manager, said: "This is the first genetic study looking at statins and ovarian cancer risk and is a useful tool in supporting other research.

"Ovarian cancer is the 6th most common cancer in women in the UK. There are around 7,500 cases each year and almost 60 per cent of women are diagnosed at a late stage."

Professor Martin added: "Our findings highlight body fatness as the most common cause of cancer after tobacco. We also found that obesity causes people to smoke and to smoke more heavily.

"Our updated findings should inform the urgency and content of public health strategies and guidelines for health professionals providing health advice."

The first five years of the ICEP programme received £4.1 million in October 2015 and is led by numerous scientists and doctors in population-based cancer sciences, including at the University of Bristol and in collaboration with overseas institutions.

The focus to date has been on cutting-edge statistical methods to distinguish cause from association. The use of large-scale human population data and new technologies to provide robust evidence to improve prevention, screening, diagnosis and treatment in cancer is what makes the ICEP programme unique.

Caroline Relton, Professor of Epigenetic Epidemiology and co-lead at the University of Bristol, has been looking at biomarkers and using DNA as starting material to identify people at higher risk of certain cancers.

She explained: "A blood test that measures chemical changes to our DNA, called DNA methylation, can identify people at high risk of lung cancer. This group could be targeted for lung cancer screening, using CT-scans."

Other studies involved looking at sleep and physical activity. Women who reported having a 'morning preference' had a 40 per cent reduced risk of breast cancer, while women who slept longer than the recommended seven to eight hours, had a 20 per cent increased risk of the disease per additional hour slept.

The results for the effect of physical activity suggested that fast walking (or any other moderate exercise) for 150 minutes each week greatly reduces the risk of getting breast cancer, prostate cancer and colorectal cancer. And 75 minutes each week running, fast cycling or vigorous home exercise has the same preventative effect.

Michelle Mitchell, Cancer Research UK's chief executive, said: "Like so many charitable organisations, we’re facing an extremely difficult financial challenge and are having to make very difficult decisions around which promising research projects we can and can't afford to fund.

"Against this backdrop, it's incredibly pleasing to be able to announce this significant research grant which is a strong endorsement of Bristol’s growing reputation as a centre of excellence for scientific research.

"We believe that the ICEP programme will help to deepen our understanding of what causes some of the hardest to treat cancers and ultimately save lives through prevention strategies and public health initiatives."