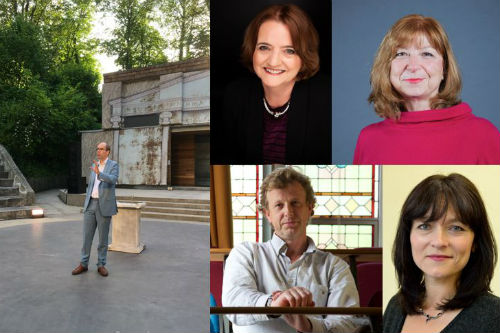 Five University of Bristol academics have been awarded Major Research Fellowships from the Leverhulme Trust.

Fellowships are awarded to well-established, distinguished researchers in the humanities and social sciences to complete a piece of original research.

Beth Williamson, Professor of Medieval Culture, based in the Department of History of Art and the Centre for Medieval Studies, has received a Fellowship for her work on a brand new, interdisciplinary project on a study of religious thought, belief, and behaviour in late medieval England.

The project, Describing Devotion, will consider medieval objects, paintings, text, buildings, music and other sound to investigate the concept of devotion.

“In this project the aim is not to carry out a study of devotional art, devotional literature or devotional music, but to use these various expressions of religious culture together to understand devotional experience itself.

“Although I am a singer and have performed medieval music for most of my life, I had never written anything that used music alongside my original research area of visual art, until an AHRC Fellowship in 2011 allowed me to devote time to developing research and publications that dealt with music as well as visual culture.

“This Leverhulme Major Research Fellowship will allow me to expand upon that work and to produce a wide-ranging, cross-disciplinary project that simply would not have been possible without this funding.”

Patrick Finglass, Henry Overton Wills Professor of Greek and Head of the Department of Classics and Ancient History, and Director of the Arts and Humanities Research Council South, West and Wales Doctoral Training Partnership, is another recipient.

He said: “I’m delighted to have received this Fellowship, which will enable me to produce the first critical edition for over half a century of Sappho, the most prominent female poet from ancient Greece, and also of her contemporary, Alcaeus, who was also from Lesbos.

“It’s remarkable that Sappho, probably the most famous classical poet in modern culture, should lack a modern critical edition and commentary, and the discovery of many new fragmentary papyrus manuscripts of Sappho over recent decades means that there is much fresh material to engage with.

“My previous editions for Cambridge University Press of Greek poets such as Sophocles, Stesichorus, and Pindar should give me the experience necessary for completing this enormously important task.”

Professor Helen Fulton, Chair of Medieval Literature in the Department of English, and a specialist in medieval Welsh literature has received a two-year Major Research Fellowship to produce an edition of medieval Welsh political poetry and to write a literary biography of Sir William Herbert, one of the key Welsh leaders during the Wars of the Roses who supported Edward IV on to the throne of England.

She said: “It is a great privilege to be given this time to work on two related projects which will cast new light on the medieval culture and politics of the March, and I'm extremely grateful to the Leverhulme Trust for supporting this work.”

Robert Mayhew, Professor of Historical Geography and Intellectual History, based in the School of Geographical Sciences, has been awarded a Major Research Fellowship for his project which looks at British ideas of, and anxieties about, both immigration and emigration over the long run from the first parliamentary act restricting French migrants fleeing the Revolution in 1793 to the present day.

He said: “Migration isn't just a demographic process or flow, it's also a set of ways of thinking about people, movement and identities. While there is lots of great work quantifying migration and thinking through its political impact, less has been done to understand its intellectual history.

“A Major Research Fellowship offers the most precious gift for me as a humanities scholar: the time in which to explore archives, think expansively and then craft a major work of historical inquiry. I am (once again) indebted to the Leverhulme Trust for this gift.”

Aurora Plomer, Professor of Intellectual Property and Human Rights, from the Law School, is researching the origins of the right to property in the European Convention on Human Rights and the rationale for its extension to companies in Europe.

Her project will review the jurisprudence of the European Court of Human Rights and evaluate the scope for protecting the intellectual property of companies in Europe in line with other international human rights Treaties and in the light of growing concerns about the use of international law by corporations to protect private commercial interests.

Professor Plomer said: “It is a great honour for me to be in receipt of such a prestigious award and an enormous privilege to be given the opportunity to dedicate myself to the project for two years.”

On his death in 1925, Lord Leverhulme left a share of his holdings in his company to provide for specific trades charities, and to offer scholarships for research and education and the Leverhulme Trust was established. In 1930, Lever Brothers merged with Margarine Unie to form Unilever – one of the world’s major multinational companies – and the shares held by the Leverhulme Trust became shares in Unilever PLC.

In assessing applications for funding, the Leverhulme Trust use the following criteria to prioritise work of outstanding scholarship: