Dinosaur brains from baby to adult 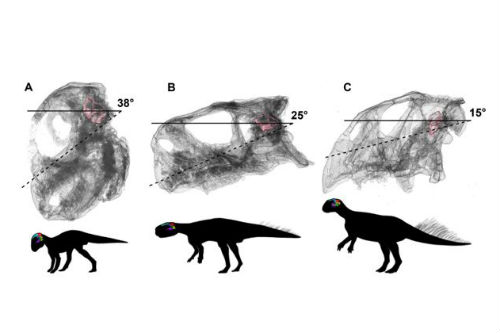 Head posture if the lateral (horizontal) semi-circular canal is parallel to the ground, in hatching (A), juvenile (B) and adult (C) Psittacosaurus lutjiatunensis. Images not to scale. Images courtesy of Claire Bullar and IVPP

New research by a University of Bristol palaeontology post-graduate student has revealed fresh insights into how the braincase of the dinosaur Psittacosaurus developed and how this tells us about its posture.

Psittacosaurus was a very common dinosaur in the Early Cretaceous period – 125 million years ago - that lived in eastern Asia, especially north-east China.

Hundreds of samples have been collected which show it was a beaked plant-eater, an early representative of the Ceratopsia, which had later relatives with great neck frills and face horns, such as Triceratops.

The babies hatched out as tiny, hamster-sized beasts and grew to two metres long as adults.

As they grew, the brain changed in shape, from being crammed into the back of the head, behind the huge eyes in the hatchling, to being longer, and extending under the skull roof in the adults.

The braincase also shows evidence for a change in posture as the animals grew. There is good evidence from the relative lengths of the arms and legs, that baby Psittacosaurus scurried about on all fours, but by the age of two or three, they switched to a bipedal posture, standing up on their elongate hind legs and using their arms to grab plant food.

Claire Bullar from the University of Bristol’s School of Earth Sciences led the new research which has been published this week in PeerJ.

She said: “I was excited to see that the orientation of the semi-circular canals changes to show this posture switch.

“This is just what we see, with the head of Psittacosaurus pointing down and forwards when it was a baby – just right for moving on all-fours. Then, in the teen or adult, we see the head points exactly forwards, and not downwards, just right for a biped.”

Co-supervisor Dr Qi Zhao from the Institute of Vertebrate Palaeontology and Palaeoanthropology (IVPP) in Beijing, where the specimens are housed, added: “It’s great to see our idea of posture shift confirmed, and in such a clear-cut way, from the orientation of the horizontal ear canal.

“It’s also amazing to see the results of high-quality CT scanning in Beijing and the technical work by Claire to get the best 3D models from these scan data.”

Professor Michael Ryan of Carleton University, Ottawa, Canada, another collaborator, said: “This posture shift during growth from quadruped to biped is unusual for dinosaurs, or indeed any animal. Among dinosaurs, it's more usual to go the other way, to start out as a bipedal baby, and then go down on all fours as you get really huge.

“Of course, adult Psittacosaurus were not so huge, and the shift maybe reflects different modes of life: the babies were small and vulnerable and so probably hid in the undergrowth, whereas bipedalism allowed the adults to run faster and escape their predators.”

Professor Michael Benton, also from the University of Bristol’s School of Earth Sciences and another collaborator, added: “This is a great example of classic, thorough anatomical work, but also an excellent example of international collaboration.

“The Bristol Palaeobiology Research Group has a long-standing collaboration with IVPP, and this enables the mix of excellent specimens and excellent research.

“Who would have imagined we could reconstruct posture of dinosaurs from baby to adult, and with multiple lines of evidence to confirm we got it right.”