Recommendations to make universities accessible to everyone 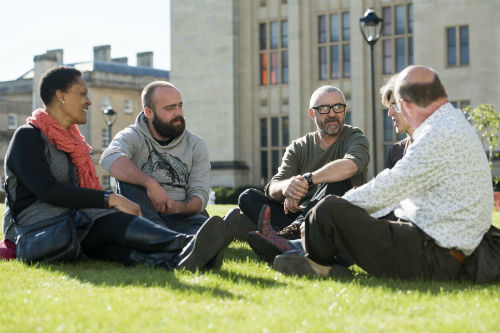 Three academics from the University of Bristol have come up with a series of recommendations which, they say, would make UK universities more accessible and responsive to a changing economy.

The options include more opportunities to study part-time over a longer period, initial study being be free for all, and a replacement of the fees and loans system with an all-age graduate tax.

The proposals come at a time when many aspects of higher education, including tuition fees, are under renewed scrutiny by the prime minister's review of post-18 education, headed by Philip Augar, and with the Office for National Statistics (ONS) reviewing the way the government accounts for student loans in its accounts.

The research by Professors Tom Sperlinger (Department of English), Josie McLellan (Department of History) and Richard Pettigrew (Department of Philosophy), is based on their own experiences of teaching at Bristol, including the introduction of courses that recruit students without qualifications and allow more flexible study.

It is presented in a new book Who Are Universities For? Remaking Higher Education which is published by Bristol University Press and is officially launched this week.

It is estimated that there are now over 150 million students in higher education across 17,000 institutions around the world. Yet, research says, many people feel that universities are not for them.

Despite the expansion of higher education since the 1960s, there are still deep inequalities in access to university. In the UK, nearly three quarters of the richest 25 to 29-year- olds had completed four years of tertiary education in 2008-14, but only a third of the poorest. There has also been a dramatic drop in flexible forms of learning.

There has been a 61 percent drop in the number of part-time students in England since 2010. The decline in part-time study comes at a time when a fourth industrial revolution will create unprecedented demand on those already in work to retrain and acquire new skills.

In addition, a report by the World Economic Forum (WEF) in 2017 notes that: “Over one in four adults surveyed reported a mismatch between their current skills and the qualifications required for their jobs. Furthermore, approximately 35 percent of the skills demanded for jobs across industries will change by 2020.”

Professor Sperlinger said: “In this context of rapid technological and economic change, it makes little sense to concentrate all of an individual’s higher education into a brief period at the beginning of their lives.

“We need a shift away from the norm of full-time study over three years at the age of 18. This model emerged in an era when the student population was dramatically smaller, and the nature of professional life was very different.

“At the same time, universities in the UK are facing a crisis of public confidence both as institutions and as symbols of expertise. We need a radical rethink of the form and structure of the higher education system if this crisis is to be addressed.”

Professor McLellan said: “In our book, we imagine some radical and optimistic ways that universities could be re-organised in future, to meet the most urgent challenges society is facing – and to do so in much more inclusive ways. We hope this book is the start of a conversation across the sector, and with communities outside it.”

Professor Pettigrew added: “We’ve included practical examples from our work creating courses for those without prior qualifications. We hope those will be useful to readers of the book, but also that this will also encourage others to come forward with their ideas and experiences – so we can all think about what universities will be for in the coming decades.”

What would a different model of universities look like, and who would benefit? The research makes four proposals:

How would a new model of universities be funded?

Who are universities for? puts forward a new funding model for universities. Key proposals are:

The researchers estimate that it would cost approximately £5 billion to make initial study free for all and estimate that the overall cost of higher education teaching on the model we propose would be £18.1 billion

They estimate the PET would raise £2.6 billion based on the current number of graduates in the UK, considerably more than the £1.8 billion raised during 2015-16 by repayments through the student loans system. The PET tax would raise £18.4 billion per year on the increased rates of participation proposed.

From 2019, the University of Bristol is expanding its Foundation Year in Arts and Humanities to include a pathway into degrees in Social Sciences. The University is also creating new routes for students without qualifications into a wide range of disciplines across the University. Its Gateway to Medicine course, aimed at students who have the potential to become doctors but do not meet the academic entry criteria to apply directly, is also a popular option.

At the new Temple Quarter Enterprise Campus, which is due to open in 2021/22, the University is exploring new flexible routes for people to study (and work) at the university. Professor Sperlinger, lead author of this research, is academic lead for engagement at the new campus.

Professor Guy Orpen, Deputy Vice-Chancellor for the Temple Quarter Enterprise Campus, said: “It is vital that UK higher education adapts to meet the most urgent challenges in society.

“The University of Bristol is already committed to facing those challenges head-on in its research, teaching and its engagement with external partners and communities. The Temple Quarter Enterprise Campus will be a catalyst for many of those efforts.

“I’m delighted that our academics are also at the forefront of challenging the sector to think anew about building models of higher education that are fit for the next hundred years.”

Who Are Universities For? Remaking Higher Education by Tom Sperlinger, Josie McLellan, Richard Pettigrew is published by Bristol University Press.