University of Bristol supports building a sustainable peace in Colombia 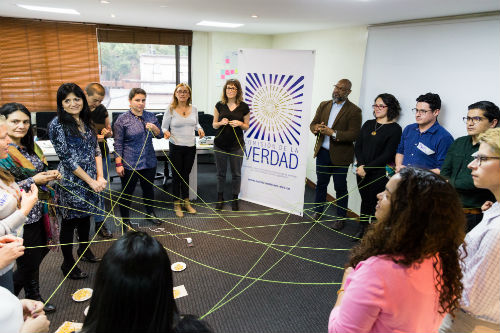 Meeting with the group in charge of the gender perspective of the Truth and Reconciliation Commission of Peru. Comisión de la Verdad

A team at the University of Bristol is investigating the gendered nature of armed conflict in Colombia in support of the Colombian Truth Commission, which formally launches today, 29 November and aims to address injustices from the war.

In 2016 a peace agreement brought an end to the world’s longest running armed conflict, the 51-year dispute between the Colombian government and the Revolutionary Armed Forces (FARC-EP).

In the aftermath of this agreement, Colombians face the challenge of building a sustainable peace by bringing the necessary transformations that address the root causes of the conflict. The Colombian Truth Commission hopes to contribute towards inclusive reconciliation and non-repetition of the atrocities, critical process for achieving peace.

Colombia’s peace agreement was the world’s first to have fundamental objectives concerning gender, including terms to promote gender equality and empower women.

Maria-Teresa Pinto-Ocampo, who is working on the project alongside Professor Brown and Dr Julia Paulson, said: “Gender crime is invisible, and women often don’t tell their story, they will talk of deaths of husbands and sons but not the crimes committed against themselves. This makes it very challenging to obtain those stories that were such a prominent part of the war.

“We want to reinforce the Commission, helping it to gather more gender-crime related testimonies using sensitive methodologies that work for women in culturally diverse communities.”

The Commission aims to address the injustices of the past by bringing truth, coexistence and non-repetition; and will use a series of projects and public discussions to officially recognise victims’ experiences, bringing past wrongs into the public domain in the hope of resolving past conflict.

Maria-Teresa Pinto-Ocampo added: “As part of the project, we will work with researchers who have experience in Commissions from other countries to lend their international expertise. We also want to help overcome the challenge of generating trust in women.”

To achieve this Professor Brown’s group will support the data gathering in Colombia, aiming to innovate new methods of gathering data about the gendered nature of legacies of armed conflict, and develop new gender-sensitive methodologies for the collection of testimonies from diverse constituencies.

Maria-Teresa Pinto-Ocampo explained: “We need to ask appropriate questions, we can’t use the standard questionnaire- were you raped? – women won’t respond. So, we hope to develop creative ways of asking, and adapt those methods to the different communities within Colombia.

“We also want to leave the women with the sense that they are not the only ones who have suffered gender-related crimes and that society is there to support them. Thereby aiding peace and reconciliation.”

Maria-Teresa Pinto-Ocampo also wants Colombians to realised that there is a toxic masculinity imbedded within Colombian society, with media and schools sometimes promoting violence against women and girls. The project was commissioned by the Arts and Humanities Research Council (AHRC).

The project forms part of Professor Brown’s ‘Bringing Memories in from the Margins’ research project, which supports inclusive reconciliation in Colombia by identifying best practice to create space for the memories of communities marginalised by conflict to shape the peace process.

The project is funded by the Newton Fund, the AHRC and Administrative Department of Science, Technology and Innovation, Colombian Government Agency, Colciencias.

Maria-Teresa Pinto-Ocampo said: “We’re honoured to be supporting the transformation of Colombia into a peaceful society.”