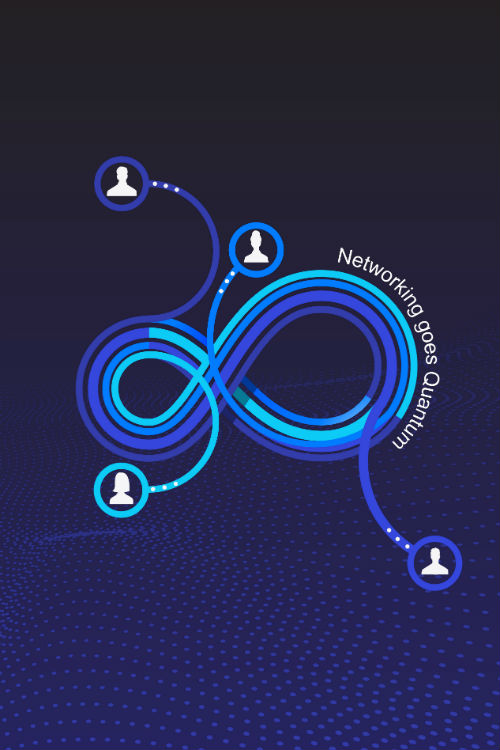 An Artists impression of the entanglement-based quantum network. The infinity symbols represent ‘entanglement’ which is the ability of measurement outcomes of different particles to be correlated instantly regardless of the distance between them. Entanglement is used as a resource to enable every user to securely communicate with every other user. Murali Krishna - Artist /Designer - kishan.krishna.jb@gmail.com

A scientist involved in expanding quantum communication to a network of users, is continuing his work at the University of Bristol.

The enhanced cyber security offered by quantum communication has been historically limited to two partner exchanges, now for the first-time scientists have connected multiple users simultaneously on a quantum encrypted network without using trusted nodes.

Researchers from the Institute of Quantum Optics and Quantum Information (IQOQI) of the Austrian Academy of Sciences, together with a collaborator from the Austrian Institute of Technology (AIT), report on the simple, seamless, cheap and secure network in the latest issue of the journal Nature, published today.

Co-author of the paper Dr Siddarth Joshi who recently moved to the University of Bristol and is continuing to develop quantum networks in the Quantum Engineering Technology Labs, said: “We created a very versatile quantum communication network where every user can talk to every other user simultaneously.

“We plan to build even bigger networks with many more users, with the goal to create a versatile foundation for building a quantum internet.”

The Viennese team achieved the long-awaited quantum network using a novel architecture based on a new method of distributing a basic resource of quantum communication –entanglement.

An entangled system is one which is interconnected to such a degree that the individual parts can’t be fully described in isolation.

Entangled light particles, photons, are the fundamental resource used in quantum communication to distribute a secure encryption key. The Viennese team’s key innovation was in producing photons such that only certain wavelengths entangle with each other.

Like a rainbow, the signal was split into different ‘colours’ and distributed cleverly between the users, who then only required basic modules to connect to the single source of entanglement.

Dr Joshi said: “By using quantum entanglement and standard passive telecommunication techniques of wavelength-based multiplexing we were able to interconnect four users in a network architecture that is scalable and requires minimal resources.”

Unlike previous efforts to create such a network, this new scheme allows all users to simultaneously communicate with all other users without using trusted nodes to relay the message. With no complex steps to route the entanglement to different users, the network is versatile, cheap and reliable.

The extension of point-to-point connections to networks represents an important step in the direction of a “quantum internet” and the researchers argue that their four-user network can be scaled to incorporate more connections.

Dr Joshi said: “The number of users is limited by available wavelength channels and the desired fully connected network topology. However, we are working on a new scheme that will allow even more users to connect to the network.

“To achieve this, we plan on improving the scalability of the network presented in the Nature paper by changing the way we multiplex to allocate communication channels to each user.

“We aim to create a network that can support different types of users in different configurations that can dynamically change depending on current network traffic. The network also requires optimal routing, redundancy of paths and a degree of anonymity.”

This news release has been adapted from the press release issued by Nature.