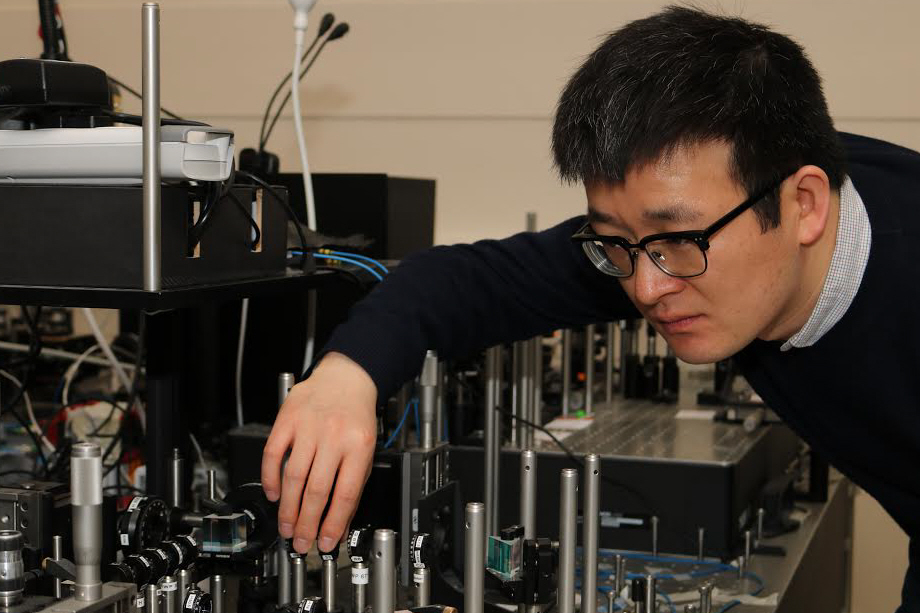 Scientists and engineers from the Universities of Bristol and Western Australia have developed how to efficiently simulate a “quantum walk” on a new design for a primitive quantum computer.

Quantum computers have significant potential to open entirely new directions for processing information and to overhaul the way that we think about and use the science of computation. Modern computers already play a huge role in society — they routinely handle and process vast amounts of data and solve calculations at an incredible rate. However, there are some problems that they just cannot solve in a useful amount of time, no matter how fast they become. The concept of a quantum computer aims to address this, exploring uncharted computation and solving at least some of these problems that classical computers cannot.

The study published today in Nature Communications, reports strong evidence that with this method something meaningful can already be seen with a primitive quantum computer that cannot be seen with a classical computer. The very first steps towards this have been implemented in the lab in Bristol.

Dr Ashley Montanaro, Lecturer in Applied Mathematics and EPSRC Fellow from the University of Bristol’s School of Mathematics, said: “A quantum computer is a machine designed to use quantum mechanics to solve problems more efficiently than any possible classical computer.

“We know some algorithms that can run on such machines and it’s an open and exciting challenge to find more. But most of the quantum algorithms we know need to be run on a large-scale quantum computer to see a speed up.”

Building a large-scale quantum computer is one of the biggest engineering challenges today. There’s a growing worldwide effort to develop one and it needs substantial effort from a wide range of expertise – including as part of the UK National Quantum Technologies Programme (UKNQT). The results could be tremendous, offering fast and cheap ways to design new materials and new pharmaceuticals.

But there is a field of research emerging now that can help accelerate understanding how quantum computers will work and how users can apply them. Examining the power of smaller, more primitive designs for quantum computers indicates that sooner than we thought, quantum machines could outperform the capabilities of classical computing for very specific tasks — “Boson Sampling” is a recent example that is driven by what is experimentally available very soon.

Big questions researchers face include what can these primitive quantum processors do that is useful to someone and how sophisticated do they need to be. The results published in today’s paper help to answer this question, by looking at how to simulate particular kinds of a phenomenon called the quantum walk.

The quantum walk at first glance is abstract. But it is the quantum mechanical version of very useful models such as Brownian motion and the “drunken sailor’s random walk”. The key difference is the particle in the quantum walk is endowed with the principle of quantum superposition. This has enabled other researchers to show they are a new way to think about how full-scale quantum computers might operate and to create useful quantum algorithms.

Xiaogang Qiang, PhD student in the School of Physics who implemented the experiment, said: “It’s like the particle can explore space in parallel.  This parallelism is key to quantum algorithms, based on quantum walks that search huge databases more efficiently than we can currently.”

Dr Jonathan Matthews, EPSRC Early Career Fellow and Lecturer in the School of Physics and the Centre for Quantum Photonics, explained: “An exciting outcome of our work is that we may have found a new example of quantum walk physics that we can observe with a primitive quantum computer, that otherwise a classical computer could not see.

“These otherwise hidden properties have practical use, perhaps in helping to design more sophisticated quantum computers.”

Ashley Montanaro is an EPSRC early career fellow and lecturer in the School of Mathematics at the University of Bristol. His research focuses on the development of new quantum algorithms and on quantum computational complexity.

Jonathan Matthews was a Leverhulme Early Career fellow for the duration of this project, supported to develop quantum walk simulators. He is now an EPSRC early career fellow, researching into quantum-enhanced sensors in the School of Physics and the Centre for Quantum Photonics at the University of Bristol.

Professor Jingbo Wang leads a research group in the University of Western Australia, researching with her colleague Thomas Loke into quantum-walk based algorithms, and their efficient quantum circuit implementations.

Xiaogang Qiang is a PhD student at School of Physics and the Centre for Quantum Photonics at the University of Bristol.