An enzyme enigma discovered in the abyss 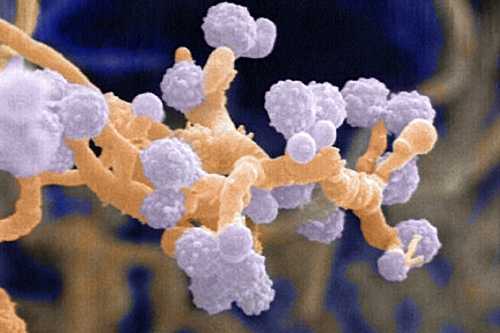 Verrucosispora maris (V. maris), a bacterium that lives on the Pacific seabed, in which the enzyme was found.

Scientists at the Universities of Bristol and Newcastle have uncovered the secret of the ‘Mona Lisa of chemical reactions’ – in a bacterium that lives at the bottom of the Pacific Ocean. It is hoped the discovery could lead to the development of new antibiotics and other medical treatments.

The Diels-Alder reaction, discovered by Nobel Prize-wining chemists Otto Diels and Kurt Alder, is one of the most powerful chemical reactions known, and is used extensively by synthetic chemists to produce many important molecules, including antibiotics, anti-cancer drugs and agrochemicals.

However, there has been much debate and controversy about whether nature uses the reaction to produce its own useful molecules. If it does, the identity of the biological catalysts (enzymes) responsible for performing this reaction have remained a mystery until now.

Some candidate natural ‘Diels-Alderases’ have been identified, but these have either been shown not to perform the reaction, or the evidence that they catalyse a Diels-Alder reaction is ambiguous.

Now, researchers at BrisSynBio, a BBSRC/EPSRC Synthetic Biology Research Centre at the University of Bristol and the School of Biology at Newcastle University have conclusively shown that a true ‘Diels-Alderase’ (Diels-Alder enzyme) exists. They have also established in atomic detail how it catalyses the reaction.

To establish the details of how the AbyU enzyme catalyses the Diels-Alder reaction, the team first had to solve the atomic structure of AbyU, and then simulate the enzyme reaction using quantum mechanics methods.

Dr Race said: “Once we had figured out how AbyU was able to make natural antibiotic, we were able to show that it could also perform the Diels-Alder reaction on other molecules that are difficult to transform using synthetic chemistry.”

The team are now investigating ways of using the enzyme to make molecules similar to abyssomisin C, in the hope that antibiotics are found that are even more effective than the natural molecule.

Dr Race said: “What is particularly exciting about our work is that not only have we resolved the riddle of the natural Diels-Alderase, but we have also shown that the enzyme can perform Diels-Alder reactions that are challenging to perform using synthetic chemistry. The work opens up a raft of possibilities for making new useful molecules that could, for example, form the basis of new medicines, materials, or commodity chemicals.”

Co-author Dr Marc van der Kamp, from BrisSynBio, said: “The work has been a great example of interdisciplinary collaboration, using techniques from biology, chemistry, physics and mathematics. As the computational chemist in the team, I am particularly pleased how a broad range of computer simulation techniques has been integral to the work, revealing details about the dynamical behaviour of the enzyme, how the substrate interacts with it, and how this interaction results in generating the Diels-Alder product.”

Dr Jem Stach, from Newcastle University, was also a co-author of the paper. He said: “Nature, not only in the compounds it produces, but also the means by which it does so, is the best chemist. This has never been clearer to me than it was during this collaboration between biologists and chemists. Starting with genome gazing, and ending with new chemistry, on a journey that took in structural biology, synthetic chemistry and computational chemistry, was utterly rewarding, educational and fascinating.”

‘The catalytic mechanism of a natural Diels-Alderase revealed in molecular detail’ by P Race, J Stach et al in The Journal of the American Chemical Society