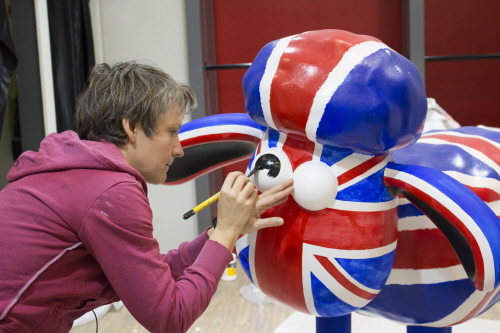 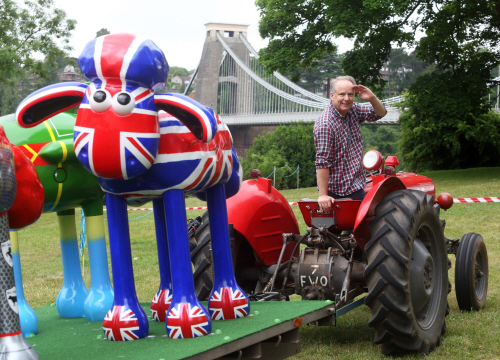 With a proud history linked to music and culture, the Victoria Rooms in Clifton will embrace a modern-day icon when it becomes home to a giant Union Jack-inspired Shaun the Sheep, aptly named Flock ‘n Roll.

The colourful sculpture, sponsored by the University of Bristol, is one of a 70-strong flock taking over the streets of Bristol from Monday [6 July] as the eagerly-anticipated Shaun in the City gets underway.

Thousands of visitors are expected to visit Bristol for the charity arts trail, which runs until 31 August and is organised by The Grand Appeal, the Bristol Children's Hospital charity.

Flock 'n Roll was created by Bristol-based illustrator and designer Carys Tait, who goes under the name Carys-ink. Her design may be familiar already as she painted it in the Galleries, Broadmead, in public view last November and a figurine is already on sale.

It will catch the attention of thousands more when it lives outside the Victoria Rooms, home to the University's Department of Music. The landmark building, which first opened its doors to the public in May 1842, was once the most important and lively cultural centre in the West of England, hosting everyone from Charles Dickens to Pink Floyd.

Explaining her inspiration for the design, Carys said: "I wanted to create a highly patriotic and characterful sheep, and thought back to London 2012 and images of enthusiastic Team GB supporters.  This particular sheep is essentially the self-appointed leader of the Team Sheep GB supporter squad.

"His look includes Union Jack face paint, hoof nail art, a sparkly red, white and blue fleece, and a small collection of supporter badges. The badges and glitter make him look quite rock 'n roll, hence the name. I was really pleased to find out he was being stationed outside the Victoria Rooms as it's such an iconic location in the city."

Sheep spotters will also be able to tick off Flock 'n Roll's neighbour, stationed outside the Royal West of England Academy (RWA) on Queens Road, which is being sponsored by the Children of the 90s project.

The University of Bristol Botanic Garden, a 1.77 hectare garden in Stoke Bishop, will be home to another one of the colourful creatures, sponsored by Dunkley's Chartered Accountants. It will be outside the welcome lodge at The Holmes on Stoke Park Road.

Each of the 5ft sculptures has been individually designed by a whole flock of artists, designers and famous faces. Full details of the artists and their designs will be unveiled on Monday.

The Bristol trail follows the success of the Shaun in the City trail in London earlier this year, which featured 50 different sculptures and was visited by hundreds of thousands of people.

All 120 Bristol and London sculptures will be displayed in the Great Sheep Round Up Exhibition in Bristol this autumn, before the whole flock is auctioned, with proceeds from the sale of the 70 Bristol sculptures supporting The Grand Appeal, the Bristol Children's Hospital Charity.

Bristol University has a strong commitment to public art and has supported previous art trails in the city. The 'Going Going Gone' gorilla which was part of the Wow! Gorillas trail in 2011 to celebrate Bristol Zoo's 175th anniversary now lives in the new Life Sciences building and Gromit sculpture 'Bark at Ee' is inside the Wills Memorial Building.

The Grand Appeal was the charity behind the hugely successful Gromit Unleashed arts trail in Bristol in 2013, which was visited by over one million people. The 80 sculptures raised more than £2.3 million at auction for The Grand Appeal.

Shaun the Sheep is one of Bristol-based Aardman Animations' best loved characters, with over four and a half million fans on social media and TV series which is broadcast in 170 territories world-wide. It was recently voted the nation's all-time favourite BBC children's TV character.

For more information about the trail, visit the Shaun in the City website.

For details of the opening times and ticket prices, please see the Botanic Garden's website.

Based at the University of Bristol, the Avon Longitudinal Study of Parents and Children (ALSPAC), known as Children of the 90s, is a long-term health research project that enrolled more than 14,000 pregnant women in 1991 and 1992. It has been following the health and development of the parents and their children in great detail ever since.

Bristol Children’s Hospital is one of the UK’s leading children’s hospitals treating patients from across the South West, South Wales and beyond with life-threatening illnesses and serves as the paediatric intensive care centre for the whole South West region. The hospital is an international, national and regional specialist centre of excellence for a range of services including neurosurgery, burns, cardiac, leukaemia and bone marrow transplants.

Shaun in the City is a public arts trail from Wallace & Gromit’s Children’s Foundation, the team behind the award-winning ‘Gromit Unleashed’ trail in 2013.

120 5ft sculptures of Shaun the Sheep will be designed and decorated by artists, designers and celebrities, of which 50 will placed in iconic locations in London (28 March – 31 May 2015) and 70 will be placed in Bristol (6 July – 31 August 2015). The trail will culminate in a public exhibition and charity auction in autumn 2015.

Shaun the Sheep made his debut in the Oscar-winning 1995 Wallace & Gromit film, ‘A Close Shave’, and hit the big screen earlier this year with the release of ‘Shaun the Sheep the Movie’.

Since then he has become a global superstar with over five million fans on social media and TV series broadcast in 170 territories worldwide.

Shaun the Sheep was voted the nation’s favourite BBC children’s TV character from the last 70 years in a recent Radio Times poll, beating Postman Pat and Sooty and Sweep who came second and third respectively.