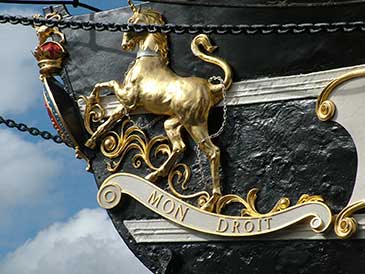 Archaeologists have located the exact position where the ss Great Britain was grounded for nearly a year during her fifth voyage to New York in 1846.

The incident, which was the result of a gross navigational error, left Brunel's second great ship high and dry on the sands at Dundrum Bay, and it was only after a lengthy salvage that the vessel was rescued and put back into service.  The exact position of the incident has long eluded historians but now it can be revealed where the ship rested, thanks to a week-long survey of the site using advanced geophysical techniques.

A team from the Department of Archaeology and Anthropology at the University of Bristol and the ss Great Britain Trust chose the exceptionally low tides last September to survey large sections of Tyrella Beach, close to Newcastle, Co. Down.  It was known that many items were removed to lighten the ship during the salvage operation, and it was hoped that some of these had remained buried in the beach where they could be detected by magnetometry.

“The results were far better than we could have dreamt of,” said project leader Professor Mark Horton of the University of Bristol.  “We actually located a huge doughnut ring of debris that fitted exactly the shape of the ship, and faced the precise direction contemporary accounts said she lay.”

In addition to huge quantities of metal, a linear feature was also found that probably represents the breakwater, constructed on Brunel's orders, to protect the ship from storms.

The contemporary accounts were somewhat confused as to the exact location for the grounding.  Remarkably, one set of compass bearings, made by a Captain Williams, turned out to be within around 80m of the correct location.  This should help historians understand why the ship was so far off course as the effect of iron hulls on the magnetic compass was not fully understood at the time.

The rescue of the ss Great Britain was one of the most innovative salvage operations of its time.  Whereas wooden ships in this location would have been lost, the revolutionary iron hull was able to withstand the winter storms.

“The Dundrum Bay incident represented the birth of modern ship salvage methods,” said Joanna Thomas, curator at the ss Great Britain and one of the team members.  “Anything that we can learn about how this was done will be immensely valuable to historians of the ship.  Because they were able to rescue her in 1847, the ship survives today.”

The cost of salvage and refitting the ship was estimated at over £22,000 (around £1.85 million in today’s money) and bankrupted the company that built and owned her.  She was bought and converted to a steam-powered clipper and worked for many years between Britain and Australia.  In 1970, the hull was brought back from the Falklands, and the ship, now fully restored, is at the centre of award-winning visitor attraction ‘Brunel’s ss Great Britain’ in Bristol Floating Harbour.

It is hoped that the team will return this year to Dundrum Bay, to probe the site further, and locate some of the original parts of the ship that were thrown overboard during the salvage.

A documentary about the research will be shown on Inside Out West, BBC ONE, 7.30pm, Monday 26 January and will be available on BBC iPlayer for 30 days after transmission.

1. Isambard Kingdom Brunel's second steamship, the SS Great Britain set out on its fifth voyage from Liverpool to New York on 22 September 1846. Mistaking the St John's Point light for the Chicken Rock light on the Isle of Man, the ship rounded the headland and was grounded in Dundrum Bay. Northern Ireland.  There were no casualties, but the ship was stuck in shallow water, and the passengers evacuated.  A number of paintings and sketches were made of the ship on the sands, but no accurate position was recorded at the time.

2. The ship was eventually re-floated in August 1847, by removing all the internal fittings, engines and stores and using a system of 'sandboxes' to lift the ship from the surrounding beach.  The operation was eventually successful, and the emptied ship towed back to Liverpool.

3.The ss Great Britain is the world’s first great ocean liner and the most experimental steam ship of its time. Launched in 1843, this iron-hulled steamship revolutionised travel and set new standards in engineering, reliability and speed. Today, Brunel’s ss Great Britain is Bristol’s no.1 visitor attraction (as voted by the public on Trip Advisor) and home to the Brunel Institute, housing one of the world’s finest maritime and Brunel collections.

4. The archaeologists used fluxgate gradiometers, which are able to map small variations in the earth's magnetic field which can be caused by buried material, especially iron, at some depth.  No surface traces or artifactual material remain on the surface today.

5. The project was kindly funded by an alumnus of the University of Bristol. The research was undertaken with the permission of the Northern Ireland Heritage and Environment Agency.