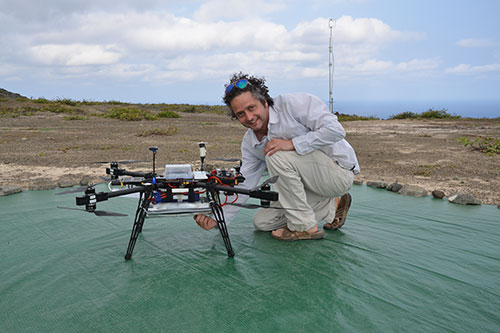 A team of scientists and engineers have been able to sample methane and CO2 gases in the remote South Atlantic thanks to the redesign of an autonomous UAV (unmanned aerial vehicles) octocopter.

Researchers from the universities of Bristol and Birmingham, and Royal Holloway, University of London have recently returned from a second research trip to Ascension Island in the South Atlantic.

Building on their experience on the island last year, the team redesigned the payload of the UAV octocopter in order to be able to sample not only methane, but CO2 using a unique pressurised system. This involved evacuating flasks at ground level, then over-pressuring these at altitudes specified during the ascent.

Dr Rick Thomas and Dr Colin Greatwood worked closely together to design the system for sampling gases, which allowed them to significantly extend the results from their first campaign.

Dr Thomas, an expert in sensor technology and beyond-line-of-visual-sight UAV operations, commented: “This is a fantastic extension to our existing system, which enabled us to sample a much wider range of gases than we have been able to before.  Not only for this project, but also for future projects in the pipeline.”

For a two-week period, the team carried out multiple flights up to 9,000 feet and 3,000ft above the inversion, including two local demonstration flights. With well over 100 successful flights in Ascension over two campaigns, they are delighted with their success and are already planning future projects.

Jim Freer, Professor of Hydrology in the School of Geographical Sciences, a member of the Cabot Institute and the co-principal investigator, said: “The technologies that we have demonstrated over the last six months are applicable to a wide range of different problems, from environmental sensing through to disaster monitoring.

“In February we travelled to Fuego, a volcano in Guatemala, where we are planning on flying an ash-sampling mission with colleagues in the Volcanology department using similar technology.”

Dr Richardson, Senior Lecturer in Flight Mechanics in the Department of Aerospace Engineering and joint Aerial Robotics lead at the Bristol Robotics Laboratory (BRL) (a partnership between the University of Bristol and the University of the West of England (UWE Bristol) ), explained: “There are so many challenges out there for UAVs that we are only just beginning to scratch the surface. Our success in Ascension however with high altitude SUAS sampling paves the way for many more successful field trips to come.”

Professor Euan Nisbet from Royal Holloway, University of London, added: “This NERC project set out to understand the strong growth in atmospheric methane emissions that has taken place since 2007 in the Southern Hemisphere tropics. Since the project started, there has been a further rapid global rise in atmospheric methane, especially in the equatorial tropics. Ascension Island, a British island just south of the equator in the mid-Atlantic, is perfectly located to investigate the causes of the rise.

Taking time out from their sample flights, the group also found time to survey Green Mountain, the highest point on Ascension and also to capture aerial footage of the Wideawake bird colony for the local conservation team.

Dr Colin Greatwood, safety pilot and technical lead, said: “`We were delighted to be able to help out and support the survey; demonstrating what can be done with these airborne robotic systems.”

Results from the NERC-funded project, aimed at improving the understanding of southern tropical methane sources, their distribution and causes of variability, will be presented at the AGU 2015 (American Geophysical Union) Fall Meeting in December, the largest Earth and space science meeting in the world.

Other colleagues on the project include: Dr David Lowry and Rebecca Brownlow from Royal Holloway, University of London and Professor Rob MacKenzie from the University of Birmingham.

A video of drone sample flights over 9,000 feet on Ascension Island is available on YouTube at: https://www.youtube.com/watch?v=bz-XB6Q9MI0

About the Bristol Robotics Laboratory

Bristol Robotics Laboratory is the leading and largest academic centre for multi-disciplinary robotics research in the UK. It is a collaborative partnership between the University of Bristol and the University of the West of England (UWE Bristol), and home to a vibrant community of over 100 academics and industry practitioners, which lead current thinking in service robotics, intelligent autonomous systems and bio-engineering.