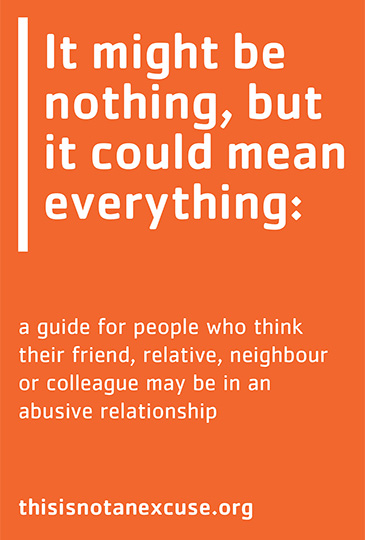 A booklet written by a researcher from the University of Bristol with the aim of helping friends and family members to support victims of domestic abuse is being distributed to hundreds of locations across the city.

Called ‘It might be nothing, but it could mean everything’, the 20-page booklet was written by Dr Alison Gregory from the University’s Centre for Academic Primary Care in collaboration with Bristol City Council and Avon and Somerset's Police Crime Commissioner. It is a guide for people who think their friend, relative, neighbour or colleague may be in an abusive relationship and gives practical advice on how to support that person.

The booklet is informed by findings from Dr Gregory’s PhD research ('On the outside looking in: the shared burden of domestic violence’) in which Dr Gregory looked at how domestic violence and abuse affects the friends and family members of the person in the abusive relationship.

‘Support for people who have a friend, relative, colleague or neighbour who is experiencing domestic abuse is so sparse, and often people have no idea how to best help the person they know,’ said Dr Gregory. ‘Also, understandably, they aren't detached from the situation because this is someone they are close too, so it has the potential to impact them too.’

The booklet, along with accompanying posters, has been sent to all the domestic and sexual violence specialist support services in Bristol as well as all GP surgeries, Children’s Centres, libraries, leisure centres and council self-service points. The campaign also involved radio adverts and billboards around the city.

‘It is really rewarding when you see a tangible product from the research you've undertaken, particularly, like in this case, one which has the potential to provide useful information and support, and hopefully change lives,’ said Dr Gregory.

The campaign has been launched in response to recent domestic homicide reviews which showed that victims weren’t known to services, but their friends and family were aware that the abuse was happening. By raising awareness of the signs to look out for, and the fact that abuse can be reported anonymously to Crimestoppers, more friends and family may feel able to speak up.

Dr Gregory now plans to continue her research thanks to an Early Career Fellowship from the Elizabeth Blackwell Institute entitled 'Preventing the ripple-out effect: development of proactive support for the friends and family members of domestic violence survivors'. This research will provide the foundation for developing and piloting a support intervention which is aimed directly at friends and relatives of people experiencing domestic abuse.

The help guides, support services and more information about the campaign can be found at www.thisisnotanexcuse.org.