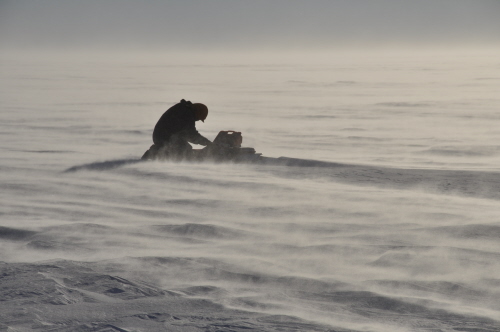 A new international study, led by the University of Bristol, is the first to use a high-resolution, large-scale computer model to estimate how much ice the West Antarctic Ice Sheet could lose over the next couple of centuries, and how much that could add to sea-level rise.

The study, which paints a clearer picture of West Antarctica’s future than was previously possible, is published today in The Cryosphere, an open access journal of the European Geosciences Union (EGU).

Dr Stephen Cornford of Bristol’s School of Geographical Sciences, lead author of the study, said: “The 4th and 5th Assessment Reports of the Intergovernmental Panel on Climate Change (IPCC) both note that the acceleration of West Antarctic ice streams in response to ocean warming could result in a major contribution to sea-level rise, but that models were unable to satisfactorily quantify that response.”

Co-author Dan Martin, from the Lawrence Berkeley National Laboratory in California, US, said: “The novel aspect of our work is the use of a high-resolution ice-sheet model over a larger area and longer time-scale than previously attempted.  Much like a higher-resolution digital camera transforms a blur into a flock of birds, higher resolution in a computer model often helps to capture details of the physics involved which may be crucial to the broad picture.”

West Antarctica is one of the fastest warming regions on Earth and its ice sheet has experienced dramatic thinning in recent years.  The West Antarctic Ice Sheet (WAIS) is out of balance because it is losing significant amounts of ice to the ocean, with the losses not being offset by snowfall.  The lost ice, drained by the ice sheet’s several ice streams, amounts to a significant contribution to sea-level rise, which is expected to increase in the future.

The researchers have now estimated how much the WAIS could contribute to global sea-level rise over the next couple of centuries.  Their high-resolution, computationally demanding simulations capture future changes in West Antarctica with increased accuracy compared to previous models.  The results reflect uncertainty in future greenhouse gas emissions, snowfall and ocean circulation, but the choice of a high-resolution model allowed the researchers to reduce the numerical error that often plagues ice-flow models.

Dr Cornford said: “We expect future change in the West Antarctic Ice Sheet to be dominated by thinning in the Amundsen Sea Embayment, just as it is today, until at least the twenty-second century.  But other regions of West Antarctica could thin to a similar extent if the ocean warms sufficiently.”

In their most extreme simulation, where the ice shelves progressively disintegrate over the next century, most of the major ice streams retreat by hundreds of kilometres.  The WAIS as a whole would contribute some 80,000 cubic kilometres of lost ice to sea-level rise by 2100 and 200,000 cubic kilometres by 2200.  This corresponds to a 20cm increase in global sea level by the end of this century – sufficient to fill the Caspian Sea – and close to 50cm by 2200.  While these amounts would be enough to threaten low-lying cities and countries, the researchers point out this is an extreme scenario.

Co-author Professor Tony Payne, also of Bristol’s School of Geographical Sciences, said: “There are many climate processes lying between the direct consequences of greenhouse-gas emissions and the regional ocean warming used as forcing in the modelling reported in The Cryosphere, many of which are poorly understood.  It would therefore be premature to attach a likelihood to any particular retreat scenario; however it is useful to quantify the magnitude of sea-level rise in some of these more extreme cases.”

The researchers wanted to find out how the ice sheet would respond to both modest and extreme future warming.  “We subjected an ice dynamics model to a range of ocean and atmospheric changes, ranging from no change at all, through the future changes projected by state-of-the-art ocean and atmosphere models, to extreme changes intended to study the upper reaches of future sea-level rise,” said Dr Cornford.

“The research involved many different steps as the results of global climate models were fed into regional models of the Antarctic atmosphere and ocean, whose results were in turn used to force the ice-sheet model in this study,” Professor Payne added.

This comprehensive high-resolution study is a significant improvement from previous calculations, which were lower in resolution or scale, allowing researchers to make more accurate predictions about West Antarctica’s future.

'Century-scale simulations of the response of the West Antarctic Ice Sheet to a warming climate' [open access] by S.L. Cornford in The Cryosphere.

The European Geosciences Union (EGU) is Europe’s premier geosciences union, dedicated to the pursuit of excellence in the Earth, planetary, and space sciences for the benefit of humanity, worldwide. It is a non-profit interdisciplinary learned association of scientists founded in 2002. The EGU has a current portfolio of 17 diverse scientific journals, which use an innovative open access format, and organises a number of topical meetings, and education and outreach activities. Its annual General Assembly is the largest and most prominent European geosciences event, attracting over 11,000 scientists from all over the world. The meeting’s sessions cover a wide range of topics, including volcanology, planetary exploration, the Earth’s internal structure and atmosphere, climate, energy, and resources.

The Cryosphere (TC) is an international scientific journal dedicated to the publication and discussion of research articles, short communications, and review papers on all aspects of frozen water and ground on Earth and on other planetary bodies.