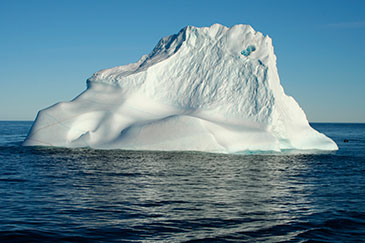 Heinrich events, in which large masses of icebergs rapidly broke free from ice sheets during the last ice age, are thought to have influenced global climate by interrupting ocean circulation patterns with a large influx of freshwater. However, new research from the University of Bristol suggests the variations in the height of the ice sheet that happen in these events might also influence global climate.

In a study published today in PNAS, Dr William Roberts of Bristol’s School of Geographical Sciences and colleagues use computer models to simulate a Heinrich event in Hudson Bay, Canada, adjusting the models to consider freshwater influx only, changing ice sheet height only or both factors together.

Dr Roberts said: “There’s lots of evidence to suggest that changing the height of the ice sheets could change atmospheric circulation or even ocean circulation but the role this forcing might play during Heinrich events has generally been overlooked.  Our study aimed to see what effects such forcing might have.”

In a simulation of changing ice sheet height only, a warm sea surface was seen in the central North Atlantic and Florida became warmer and wetter.  Both these effects have been observed in the paleoclimate record but cannot be accounted for with freshwater influx models alone.

In other regions, for example the tropical Atlantic, both changes in ice sheet height and freshwater influx appeared to affect the climate response.

These results indicate that, although the altered atmospheric circulation due to changing ice sheet height is not the sole driver of climate change in Heinrich events, its previously unrecognized contribution to global climate may merit consideration.

Dr Roberts said: “Our results suggest that the simple paradigm of a Heinrich event causing climate change via freshwater inputs into the North Atlantic needs to be revised.  They also suggest that you can't use the climate changes that occur during Heinrich Events as a simple template for the changes that might occur from an influx of freshwater to the North Atlantic.”