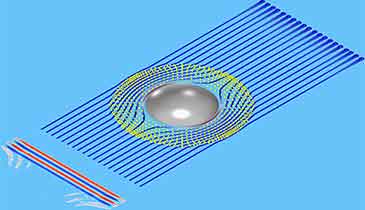 Author’s impression of an acoustic micro-cloak made of an array of spherical particles Image courtesy of Mihai Caleap, University of Bristol, copyright © 2014

Using an acoustic metadevice that can influence the acoustic space and can control any of the ways in which waves travel, engineers have demonstrated, for the first time, that it is possible to dynamically alter the geometry of a three-dimensional colloidal crystal in real time.

The colloidal crystals designed in the study, called metamaterials, are artificially structured materials that extend the properties of existing naturally occurring materials and compounds.  The research by academics from the University of Bristol’s Department of Mechanical Engineering is published online this week in PNAS (Proceedings of the National Academy of Sciences).

Dr Mihai Caleap, Research Associate in the Department of Mechanical Engineering, said: “We have been working on systems that are reconfigurable in real time with a view to creating genuinely active metamaterials.

“Such materials will allow researchers to gain unprecedented control over a range of optical and acoustic wave phenomena. To date, whilst numerous examples of metamaterials now exist, none are reconfigurable in three-dimensions.”

The researchers used acoustic assembly to trap a suspension of microspheres in patterns resembling crystal lattices.  The study showed the experimental realisation of a three-dimensional colloidal crystal that is reconfigurable in real time and that has the ability to rapidly alter its acoustic filtering characteristics.

Dynamically reconfigurable metamaterials based devices with optical or acoustic wavelengths from ten microns to ten cm could have a wide range of applications.  In optics it could lead to new beam deflectors or filters for terahertz imaging and in acoustics it might be possible to create acoustic barriers that can be optimised depending on the changing nature of the incident sound.  Further applications in reconfigurable cloaks and lenses are also now conceivable.

Bruce Drinkwater, Professor of Ultrasonics in the Department of Mechanical Engineering and co-author, said: “Our reconfigurable acoustic assembly method is an important step as it has clear advantages over other possible approaches, for example optical trapping and self-assembly.

“In particular, acoustic assembly is scalable with wavelength from microns to metres.  The method will work on a vast range of materials, such as nearly all solid-fluid combinations, it will also enable almost any geometry to be assembled and it is cheap and easy to integrate with other systems.”