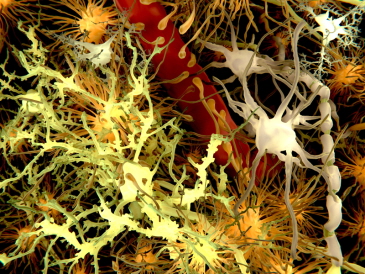 The main cells of the brain, with neurons in yellow and astrocytes in orange.

New research has revealed a previously unknown mechanism in the body which regulates a hormone that is crucial for motivation, stress responses and control of blood pressure, pain and appetite. The breakthrough could be used to design drugs to help fight health problems connected with these functions in the future.

Researchers at the University of Bristol and University College London found that lactate – essentially lactic acid – causes cells in the brain to release more noradrenaline (norepinephrine in US English), a hormone and neurotransmitter which is fundamental for brain function. Without it people can hardly wake up or focus on anything.

Production of lactate can be triggered by muscle use, which reinforces the connection between exercise and positive mental wellbeing.

Lactate was first discovered in sour milk by Swedish chemist, Carl Wilhelm Scheele in 1780. It is produced naturally by the body, for example when muscles are at work. In the brain, it has always been regarded as an energy source which can be delivered to neurones as fuel to keep them working when brain activity increases.

This research, published today [11 February] in Nature Communications, identifies a secondary function for lactate as a signal between brain cells. It implies that there is an as yet unknown receptor for lactate in the brain which must be present on noradrenaline cells to make them sensitive to lactate.

Professor Sergey Kasparov, from Bristol University’s School of Physiology and Pharmacology, said: “Our findings suggest that lactate has more than one incarnation - in addition to its role as an energy source, it is also a signal to neurones to release more noradrenaline.”

Dr Anja Teschemacher, also from the University of Bristol, added: “The next big task is to identify the receptor which mediates this effect because this will help to design drugs to block or stimulate this response. If we can regulate the release of noradrenaline – which is absolutely fundamental for brain function - then this could have important implications for the treatment of major health problems such as stress, blood pressure, pain and depression.”

Astrocytes, small non-neuronal star-shaped cells in the brain and spinal cord, are the principle source of brain lactate. The discovery that astrocytes communicate directly with neurones opens up a whole new area of pharmacology which has been little explored.