The wind in the willows 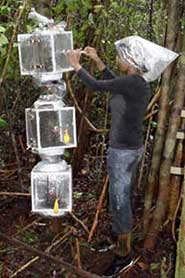 Wetland trees are a significant overlooked source of the potent greenhouse gas methane, according to a new study by researchers at The Open University and the Universities of Bristol and Oxford.

Wetlands are a well-established and prolific source of atmospheric methane.  Yet despite an abundance of seething swamps and flooded forests in the tropics, ground-based measurements of methane have fallen well short of the quantities detected in tropical air by satellites.

In 2011, Sunitha Pangala, a PhD student at The Open University, who is co-supervised by University of Bristol researcher Dr Ed Hornibrook, spent several weeks in a forested peat swamp in Borneo with colleague Sam Moore, assessing whether soil methane might be escaping to the atmosphere by an alternative route.

Sunitha Pangala said: "Methane emissions normally are measured by putting sealed chambers on the ground to capture gas seeping or bubbling from the soil.  We also enclosed tree stems in chambers and the results were surprising.  About 80 per cent of all methane emissions was venting through the trees.”

The roots of trees, like all plants, need oxygen to survive.  One strategy that trees use to cope in waterlogged soil is to enlarge porous structures, known as lenticels, in their stems to allow air to enter and diffuse to their roots.  Pangala and colleagues have shown that these common adaptations in wetland trees are two-way conduits that also allow soil gas to escape to the atmosphere.

Dr Gauci said: "This work challenges current models of how forested wetlands exchange methane with the atmosphere.  Ground-based estimates of methane flux in the tropics may be coming up short because tree emissions are never included in field campaigns.”

Although willow is a familiar inhabitant of wet soil, it was not among the trees studied in the Sebangau River catchment in Borneo.  However, the eight tree species investigated by the team are common in the tropics, including the vast Amazon Basin.  Establishing whether tree-mediated emissions of methane are ubiquitous in tropical wetlands is now the focus of a new three-year Natural Environment Research Council grant to Dr Gauci and Dr Hornibrook that begins later this year.