Deodorants: do we really need them? 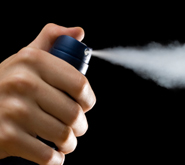 The study was based on a sample of 6,495 women who are part of the wider Children of the 90s study at the University of Bristol. The researchers found that about two per cent (117 out of 6,495) of mothers carry a rare version of a particular gene (ABCC11), which means they don’t produce any under-arm odour.

Speaking about the novel finding, published today in the Journal of Investigative Dermatology, the lead author Professor Ian Day said: “An important finding of this study relates to those individuals who, according to their genotype, do not produce under-arm odour. One quarter of these individuals must consciously or subconsciously recognise that they do not produce odour and do not use deodorant, whereas most odour producers do use deodorant. However, three quarters of those who do not produce an odour regularly use deodorants; we believe that these people simply follow socio-cultural norms. This contrasts with the situation in North East Asia, where most people do not need to use deodorant and they don’t.”

The first author of the paper, Dr Santiago Rodriguez added: “These findings have some potential for using genetics in the choice of personal hygiene products. A simple gene test might strengthen self-awareness and save some unnecessary purchases and chemical exposures for non-odour producers.”

The authors highlight that people who carry this rare genetic variant are also more likely to have dry (rather than sticky) ear wax and that checking ear wax is a good indicator of whether or not a person produces under-arm odour.

This study looked for the first time at deodorant usage in relation to ABCC11 genotype and also in comparison with other factors such as age, background and general household hygiene. At the individual level, the influence of ABCC11 genotype was much stronger than the other factors. The statistical support for the ABCC11 finding was extremely strong – the random chance of getting the same answer was less than one in a million million million odds.