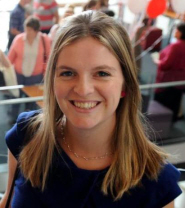 A PhD student from the University of Bristol has been named the joint winner of a national competition to honour the best science bloggers in the country. Suzi Gage, whose Sifting the Evidence blog focuses on research and ideas in the field of epidemiology and public health, won the 2012 UK Science Blog Prize alongside renowned pharmacologist Professor David Colquhoun.

Suzi Gage, whose Sifting the Evidence blog focuses on research and ideas in the field of epidemiology and public health, won the 2012 UK Science Blog Prize alongside renowned pharmacologist Professor David Colquhoun.

The inaugural award, organised by the Good Thinking Society in association with Soho Skeptics, received over 100 entries from leading bloggers and was judged by top scientists and science writers, including Ben Goldacre who is well-known for his ‘Bad Science’ column in The Guardian and Mark Henderson, former science editor at The Times and author of The Geek Manifesto.

Suzi, an epidemiologist based in the School of Social and Community Medicine, is currently investigating whether there is a link between recreational drug use and mental health problems in teenagers.

The 29-year-old, from St Werburghs, started blogging in the summer of 2011 and said: “I'm astounded and delighted to have won this prize alongside David. The other nominees were some of the very people who inspired me to start blogging in the first place, so to be listed alongside them, let alone win, is a huge honour.”

The judges deliberated long and hard but could not separate the relative merits of David and Suzi and decided to split the award this year.

Simon Singh, who helped judge the prize, said: “It was hard to compare such a diverse range of blogs, on a wide variety of topics. Bloggers ranged from teenagers to emeritus professors, from doctors to astronomers. In the end, it seemed fairest to recognize this diversity by splitting the prize between two excellent bloggers.”

The winners received £500 each and the judging criteria for the blogs included scientific content, reach, influence, entertainment and frequency of posting.

Professor Marcus Munafo, Suzi’s PhD co-supervisor, said: "Suzi really is in great company - those shortlisted represent the very best bloggers in the UK, including senior academics and professional science writers. To come out on top is an outstanding achievement, and shows that it's possible to balance the demands of a successful academic career with public engagement activities of the highest quality.”

Suzi is also an active member and blogger for ScienceGrrl, a network of female scientists who are passionate about passing on their love of science, technology, engineering and mathematics (STEM) to the next generation.