Even moderate drinking in pregnancy can affect a child’s IQ 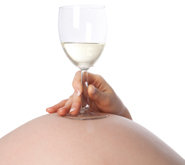 Relatively small levels of exposure to alcohol while in the womb can influence a child’s IQ, according to a new study published today in PLOS ONE by researchers from the Universities of Bristol and Oxford using Children of the 90s study (ALSPAC) data from over 4,000 mothers and their offspring.

Relatively small levels of exposure to alcohol while in the womb can influence a child’s IQ, according to a new study, published today in PLOS ONE, by researchers from the Universities of Bristol and Oxford using Children of the 90s study (ALSPAC) data from over 4,000 mothers and their offspring.

Current advice to pregnant women about moderate alcohol consumption during pregnancy is contradictory, with some official guidelines recommending complete abstinence and others suggesting that moderate use is safe. Previous studies have produced conflicting and inconsistent evidence on the effects of moderate alcohol intake on a child’s IQ. This may be because it is difficult to separate the effects of moderate alcohol consumption from other lifestyle and social factors, such as smoking, diet, affluence, mother’s age and education.

This study, believed to be the first substantial one of its kind, used genetic variation to investigate the effects of moderate (<1-6 units of alcohol per week) drinking during pregnancy among a large group of women and their children. Since the individual variations that people have in their DNA are not connected to lifestyle and social factors, the approach removes that potential complication.

Four genetic variants in alcohol-metabolising genes among the 4,167 children were strongly related to lower IQ at age eight. The child’s IQ was on average almost two points lower per genetic modification they possessed.

But this effect was only seen among the children of women who were moderate drinkers. There was no effect evident among children whose mothers abstained during pregnancy, strongly suggesting that it was the exposure to alcohol in the womb that was leading to the difference in child IQ. Heavy drinkers were not included in the study.

When a person drinks alcohol, ethanol is converted to acetaldehyde by a group of enzymes. Variations in the genes that ‘encode’ these enzymes lead to differences in their ability to metabolise ethanol. In ‘slow metabolisers’, peak alcohol levels may be higher and persist for longer than in ‘fast metabolisers’.

It is believed that the ‘fast’ metabolism of ethanol protects against abnormal brain development in infants because less alcohol is delivered to the fetus, although the exact mechanisms are still unclear.

Previous studies have relied on observational evidence, but this is problematic. Observational studies often find that moderate drinking is beneficial compared to abstention, but this is because mothers who drink in moderation during pregnancy are typically well educated, have a good diet and are unlikely to smoke – all factors which are linked to higher IQ in the child, and which mask any negative effect that exposure to alcohol may have.

This study, on the other hand, looked at moderate (rather than high) alcohol intake in over 4,000 women and used a novel technique known as Mendelian randomisation, which is a scientifically robust way of investigating the links between exposures and later diseases, using genetic variants which modify exposure levels and which are not influenced by lifestyle or other factors.

The mothers’ alcohol intake was based on a questionnaire completed when they were 18 weeks’ pregnant. It included questions on the average amount and frequency of alcohol consumption before the current pregnancy, during the first trimester, and in the previous two weeks or at the time when they first felt the baby move. One drink was specified as one unit of alcohol.

Around 32 weeks of gestation the mother completed another questionnaire in which she was asked about her average weekday and weekend alcohol consumption, from which weekly intake was derived. Any woman who reported drinking, even if it was less than one unit per week either in the first trimester or when she felt the baby first move was classified as drinking during pregnancy.

At approximately 18 and 32 weeks of pregnancy, the women were also asked on how many days during the past month they had drunk two pints of beer (or the equivalent amount of alcohol). Any women who reported doing this on at least one occasion was classified as a binge drinker for the purposes of this analysis and were excluded.

The children’s IQ was tested when they were aged eight using a shortened version of the Wechsler Intelligence Scale for Children from which an overall age adjusted total score was derived.

Speaking about the findings, the report’s main author, Dr Sarah Lewis, said: "Our results suggest that even at levels of alcohol consumption which are normally considered to be harmless, we can detect differences in childhood IQ, which are dependent on the ability of the foetus to clear this alcohol. This is evidence that even at these moderate levels, alcohol is influencing foetal brain development."

Dr Ron Gray from the University of Oxford who led the research added: "This is a complex study but the message is simple: even moderate amounts of alcohol during pregnancy can have an effect on future child intelligence. So women have good reason to choose to avoid alcohol when pregnant."

1. The paper, ‘Fetal alcohol exposure and IQ at age 8: evidence from a population based birth-cohort study’ by Lewis, S et al is published in PLOS ONE.

2. A ‘unit’ contains 10ml of ethanol (pure alcohol). A pint of beer is approximately equal to two units, and a glass of spirits or a small glass of wine to one unit of alcohol.

3. Alcohol, like carbon monoxide from cigarettes, passes easily through the placenta from the mother's bloodstream into her baby's blood and puts her fetus at risk of having a fetal alcohol spectrum disorder (FASD). The blood alcohol level (BAC) of the fetus becomes equal to or greater than the blood alcohol level of the mother. Because the fetus cannot break down alcohol the way an adult can, its BAC remains high for a longer period of time. (Source: US Department of Health and Human Services).

4. People with lower IQ are more likely to be socially disadvantaged, have poorer health and even die younger than those with higher IQ.

5.Based at the University of Bristol, Children of the 90s, also known as the Avon Longitudinal Study of Parents and Children (ALSPAC), is a long-term health-research project that enrolled more than 14,000 pregnant women in 1991 and 1992. It has been following the health and development of the parents and their children in detail ever since and is currently recruiting the next generation into the study. It is celebrating its 21st birthday in 2012. It is funded by the University of Bristol, the Wellcome Trust and the Medical Research Council. Find out more at www.childrenofthe90s.ac.uk.